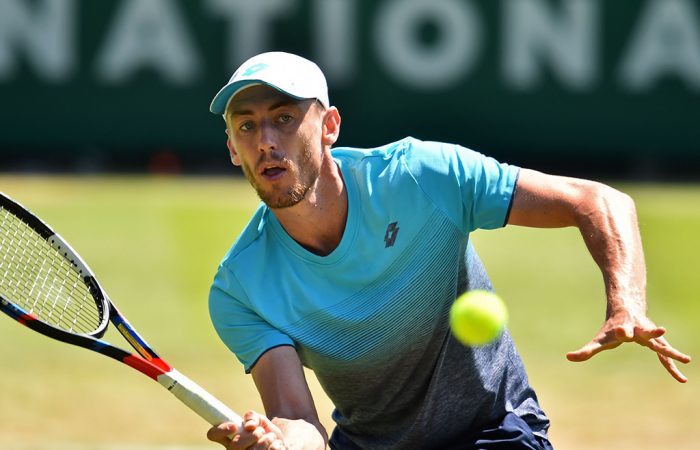 John Millman has been presented with a golden opportunity to ignite Australia’s Wimbledon assault with a day-one crack at little-known Stefano Travaglia.

But the affable Queenslander isn’t counting his chickens just yet, insisting Italy’s world No.138 commands full respect after storming through qualifying without dropping a set in three matches.

“I think his closest set was 6-4. That gives you a lot of confidence moving forward,” Millman said of Monday’s opener.

“He’ll be feeling good, he’s used to the conditions here in London and I’m under no illusion that it’s going to be an easy match because I think every match here is extremely tough.

“I’m looking forward for a bit of a battle. (But) it’s better than last year because last year I was on Court 1 against Rafa (Nadal).”

A win over Travaglia would likely propel Millman into a second-round contest with 2016 finalist Milos Raonic.

Smith earned a start against another Italian, veteran world No.43 Andreas Seppi, with three qualifying wins.

The 29-year-old Townsville product is thrilled to be back in the main draw for only the second time and eager to extend his parents’ London holiday with a nice run.

“They’re here for obviously as long as I can be here. But they’re booked in until at least the start of the second week,” Smith said.

“I’ve got a tough opponent, Seppi. Obviously he’s had some good wins over some top players, but I’m really looking forward to it.”

“He’s a really good player, consistently on the ATP Tour now,” Kubler said of the world No.72.

“I played him once on clay, maybe four years ago, so we’re familiar with each other but grass – anything can happen – so we’ll see.”