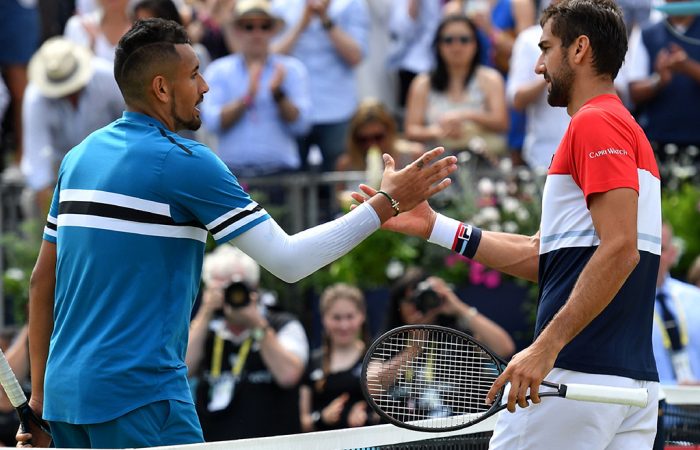 In a battle of the big serves, No.1 seed Marin Cilic overcame Australia’s Nick Kyrgios to advance to the final of the Fever Tree Championships at Queen’s Club.

The Croatian got the job done in two tiebreaks, winning 7-6(3) 7-6(4) to advance to the Queen’s decider for the second straight year.

2012 champion @cilic_marin is back in the @QueensTennis final for the 4th time!

All week, the talk at Queen’s had centred around the serving dominance of Kyrgios; the Aussie had in his second-round and quarterfinal victories registered 32 aces in each match.

But on Saturday, Cilic proved his serving equal. The top seed finished with 11 aces to Kyrgios’s 16, yet did not face a break point throughout the match and had a higher winning percentage on first (88) and second (70) serves.

With Kyrgios saving both break points he faced during the match, this semifinal duel was determined in two tiebreaks.

And it was at these stages the 29-year-old Cilic proved more focused and solid, capitalising on some loose errors from Kyrgios in both breakers to run out a straight-sets winner.

In fact, an excellent fortnight: semifinals at both Stuttgart and Queen’s has given the Aussie five grass-court wins in seven matches.

“Nick is serving so, so good and it was definitely tough from both ends to get any looks on the returns or break points,” said Cilic, who last year lost to Feliciano Lopez in a third-set tiebreak in the Queen’s final.

“Obviously, as expected, a couple of points made the difference in both those tiebreaks. And I was maybe a little bit more lucky in those situations, and composed, and got a couple of good shots on critical moments.”

Cilic will play the winner of the second semifinal between Novak Djokovic and Jeremy Chardy.

Bidding to reach her first tour-level grass-court final, Sam Stosur went down to defending champion Anastasija Sevastova on Saturday at the Mallorca Open.

The first set was a tense affair, with Stosur, ranked No.98, matching the third seed and responding to two lost service games with immediate breaks back.

But once the set arrived at the tiebreak, Sevastova dominated, racing ahead 6-0 and closing it out two points later as Stosur started to suffer under the weight of her errors.

Stosur called for coach Josh Eagle at the end of the set and revealed that she was struggling to cope with the Latvian’s forehand, which she claimed wasn’t “coming through” the court in the same way that her backhand did.

And the Australian’s struggles persisted in the second set; Sevastova won six of seven games to complete a 7-6(1) 6-1 win.

Both women finished with 14 winners yet Stosur was hurt by an unforced error tally of 28 compared with Sevastova’s nine.

It was nevertheless an encouraging week for Stosur, who advanced to her first grass-court semifinal in seven years and who is projected to rise to No.87 in next week’s rankings.

Sevastova, meanwhile, moves through to the Mallorca final for the third straight year.

At the ATP Challenger event in Ilkley, England, Jason Kubler went down in the semifinals to Germany’s Oscar Otte.

Otte won 6-0 7-5, but despite the loss Kubler will be buoyed by the fact that, after reaching the biggest grass-court semi-final of his career, he’s projected to return to the world’s top 150.

That puts him within striking distance of his career-high mark of No.136, set back in November 2014.