In the week before Wimbledon, several Aussies will head to the south coast of England to fine-tune their grass-court games at the Eastbourne International. 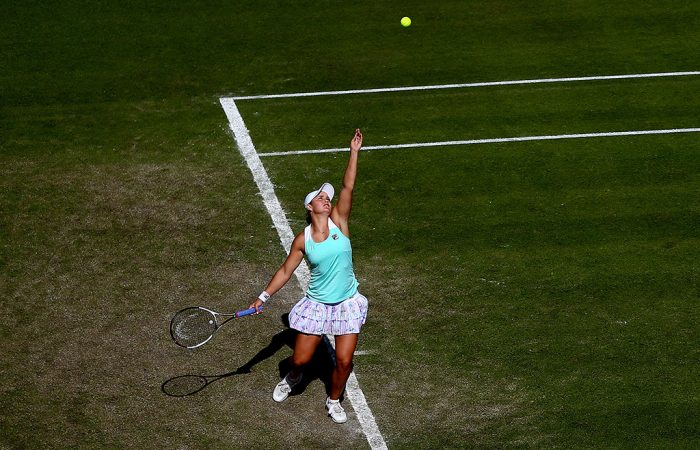 Ash Barty and Daria Gavrilova lead the Aussie charge at Eastbourne in the final week of grass-court play before Wimbledon, which begins on 2 July.

Barty is the No.8 seed at the WTA Premier-level event, and receives an opening-round bye before a meeting in round two with either Kristina Mladenovic or British wildcard Heather Watson.

Barty, the champion in Nottingham last week, is seeded to meet No.1 seed Caroline Wozniacki in the quarterfinals, but may have to go through 10th seed Magdalena Rybarikova in the last 16, the Slovakian who is playing in Sunday’s Birmingham final.

Gavrilova is seeded 15th, and like Barty receives a first-round bye. Awaiting her in round two will be either Agnieszka Radwanska or Timea Babos, before a projected meeting with No.3 seed Petra Kvitova, who beat Gavrilova this week en route to the Birmingham final.

Sam Stosur has been awarded a main-draw wildcard and will attempt to continue the grass-court form that took her to this week’s Mallorca semifinals when she comes up against Alison Van Uytvanck.

John Millman is playing the concurrent ATP event in Eastbourne a 250-level tournament for the men.

Alex De Minaur is one win from joining Millman in the main draw; the Aussie teenager on Saturday beat British wildcard Jonathan Gray 6-1 6-3 and will take on Italy’s Matteo Viola – who beat another Aussie, Andrew Whittington, in his first match – in a bid to qualify.

At the ATP grass-court event in Antalya, Turkey, Jordan Thompson – who reached the quarterfinals of this week’s Ilkley Challenger – lines up against Czech Vesely in the first round.

The winner advances to a second-round meeting with No.3 seed Fernando Verdasco.