Nick Kyrgios pulls out of French Open with injury

Nick Kyrgios withdraws from his first-round match against Bernard Tomic at the French Open as he fails to fully recover from an elbow injury. 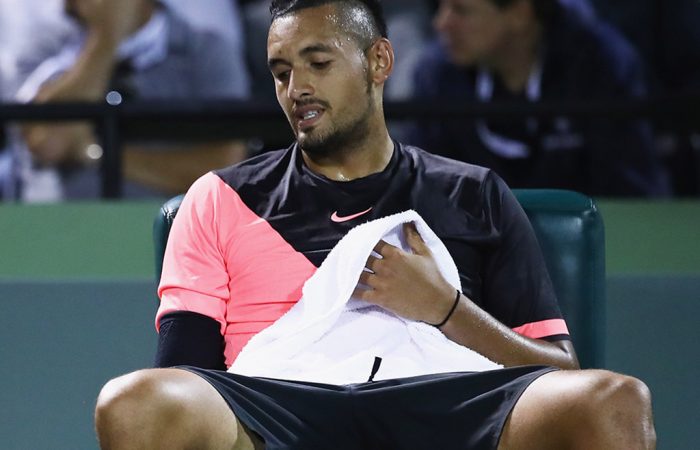 Nick Kyrgios has withdrawn from the French Open in Paris with an elbow injury, denying fans a first-time showdown with fellow Australian Bernard Tomic.

Kyrgios had been under a fitness cloud having not played a singles match for six weeks and returning home last month for cortisone treatment for the chronic injury.

The 23-year-old on Saturday said he remained only “about 80 per cent” fit after teaming with American Jack Sock to land his maiden ATP doubles crown in Lyon.

He went behind closed doors for a practice session with Sock at Roland Garros on Sunday before pulling the pin.

“Unfortunately I have to withdraw from this year’s French Open,” he said on Twitter.

“Having consulted with my team and medical experts it is deemed too risky for me to step out and potentially play five sets on clay, especially as I have not played a singles match in nearly two months.

“I’ve worked hard to be ready and desperately wanted to play Roland Garros, which is very special to me but I literally ran out of time.

“A dramatic spike in load on my elbow could potentially put me back to square one and with the grass-court season around the corner it is something I cannot and will not risk.

“The good news is I’m finally pain free, working hard and enjoying my training and I’m looking forward to being back in singles action in Stuttgart.

“I’m sorry to those fans who bought tickets to watch me play but am also grateful for the continued love and support.”

Should Tomic win his opener, the world No.206 will play either Romanian Marius Copil or Italian Marco Cecchinato for a place in the last 32 in Paris for the first time.

😢😩😢😩 Sorry guys, I tried everything I could to be ready for @rolandgarros but I came up short. I’ll be back though. ❤️🙏🏽 pic.twitter.com/jZ7OQpm28H