Following a 4-1 victory over the Netherlands in Wollongong, all members of the Australian Fed Cup team fronted the media and shared their thoughts on a winning weekend. 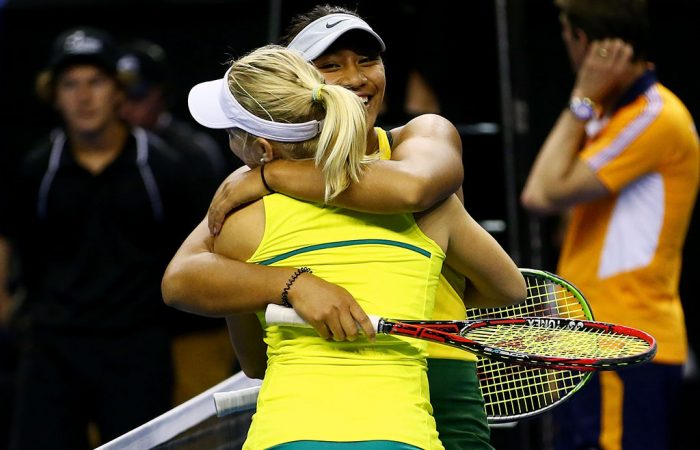 “You look at the nations who have dominated (Fed Cup) in the last 10 years or so. One of the most dominant teams is the Czech Republic. They have quality singles players and a quality doubles combination and that’s what we have.”

“It feels unreal. I played really well, I thought. I felt really good and I had so much fun. It was a dream come true to finally win a match in a home tie, because I haven’t done that before. I played really tough on big points … Alicia was always telling me that every time I played a tough point, probably 90 per cent of the time I won them, so I focused on that.”

“I felt pretty happy. I was really excited when I got the news (I was playing) – I was like, yes, finally! (laughter). I really enjoyed playing dubs, especially with Dash – we’ve been practising since my first tie as well so it was really good to get that first rubber under my belt, and especially a win as well. Felt really proud playing for my country and hopefully I’ll get another chance soon.”

“It’s definitely right up there (this particular Australian Fed Cup team). When I started though it was Alicia (Molik), Pratty (Nicole Pratt), Stubbsy (Rennae Stubbs), myself, and that’s a pretty good team as well (laughter). I think maybe a few years ago we didn’t have as many choices as we do now, and I think that’s a fantastic position to be in.

“(The World Group) is where you want to be … it’s definitely hard doing that bounce between World Group II and World Group I and now that we’ve got ourselves in that top tier, that’s where everyone wants to be and there’s only eight (nations) – and now we’re one of them.”

“Yeah, absolutely (we can challenge for the Fed Cup title next year). Look at who you have sitting in front of you. We’re pretty lucky and we’re privileged and we’ve got a great team – we’ve got depth. We’ve got a Grand Slam champion (Stosur), we’ve got a top 20 player (Barty), we’ve got a WTA tournament winner – Dasha is also very close to the top 20 at the moment. And Destanee has her first Fed Cup, has won her first rubber ever. She’s also accomplished.

“I think we’re not just contenders – I think we’re a genuine chance to win Fed Cup next year. And I’m just really proud of the way the team’s come together.