Daria Gavrilova cements a 3-1 lead for Australia with a straight-sets win over Quirine Lemoine, after Ash Barty subdued a dogged Lesley Kerkhove. Australia returns to the elite eight-nation World Group in 2019. 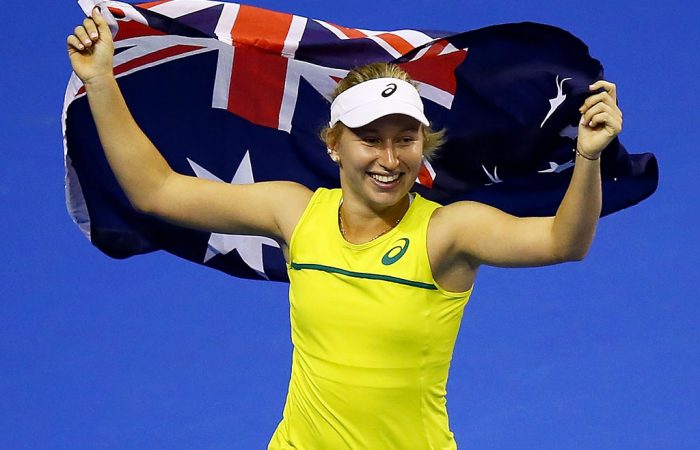 Daria Gavrilova completed a 6-3 6-2 victory over Quirine Lemoine on Sunday to send Australia back into next year’s Fed Cup World Group.

Her win over Lemoine gave the hosts an unassailable 3-1 lead over the Netherlands in Wollongong, and followed Ash Barty’s impressive display to beat Lesley Kerkhove in the first of the reverse singles rubbers.

Barty beat the Dutchwoman 6-4 6-2 to move Australia ahead 2-1 at the Wollongong Entertainment Centre, in the process winning her eighth consecutive Fed Cup rubber.

In the doubles rubber, Gavrilova teamed up with debutant Destanee Aiava and the pair combined brilliantly, beating Kerkhove and Demi Schuurs 6-3 6-2 to complete a 4-1 victory for the green-and-gold.

Gavrilova was subbed in for Sam Stosur in the reverse singles, and was highly motivated to improve on her Fed Cup record, which stood at 2-6.

She skipped out to the 3-0 lead yet her bouncy, positive body language changed when the left-handed Lemoine tied up the opening set at 3-3.

In match far closer than the scoreline suggested, Gavrilova outlasted Lemoine in a series of gruelling points to break for a 5-3 lead, and despite trailing 0-30 in the next game, recovered to serve out the set, belting a swinging volley before stabbing a traditional volley for a winner to cap it with a flourish.

Leading by a set and a break, Gavrilova trailed 15-40 in the sixth game yet escaped thanks to attacking, positive play.

And she maintained her lead to triumph in one hour and 20 minutes.

“It feels unreal. I played really well, I thought … I felt really good and I had so much fun,” Gavrilova said.

“It was a dream come true to finally win a match in a home tie, because I haven’t done that before.

“I played really tough on big points … Alicia (Molik) was always telling me that every time I played a tough point, probably 90 per cent of the time I won them, so I focused on that.”

Barty’s victory against the world No.210 extended her Fed Cup singles record to 6-1 and her overall tally to a sparkling 11-2.

Yet she was forced to fight hard, especially in the first set.

“For me it was tough (early) to get it out of her strike zone … I think I just had to weather the storm a little bit, wait for a couple of cheapies – because I knew they would come – and it was a matter of me hanging in there and staying tough in the tough moments.”

No player registered a break point in the first seven games, with Barty finally gaining one in the eighth game – only for Kerkhove to serve her way out of trouble.

Playing the same brand of clean, aggressive, consistent tennis that proved too much for Sam Stosur on Saturday, Kerkhove hung with the 19th-ranked Barty, until the Aussie scored another two break points in the 10th game and finally converted to pocked the first set.

Breaking immediately in the second, Barty was cruising, yet played a loose third game, ending with a double fault, to surrender serve to love.

Visibly irritated, it proved a jolt for the Queenslander, who would lose only one more game for the match.

Her slice backhand was a particular weapon; mixing it in with her double-hander, Barty was always able to keep Kerkhove off balance and the ball out of her strike zone.

She admitted she just had to get the balance right. “I think when I play my best I have pretty much a 50-50 mix of topspin and the slice backhand,” Barty said.

“Today I actually shot myself in the foot a little bit in the first set, trying to overuse the slice. And then I think early in the second I went the other way and hit too many toppies (two-handed backhands).

“I’m confident in my slice that I can put the ball when I want in the court. Not necessarily to hit a winner, but I know if I can put it in difficult positions for my opponent, that sets me up best.”