Australian Fed Cup captain Alicia Molik has banked on No.1 player Ash Barty and the vastly-experienced Sam Stosur to get the job done for the hosts against Netherlands in Wollongong this weekend. 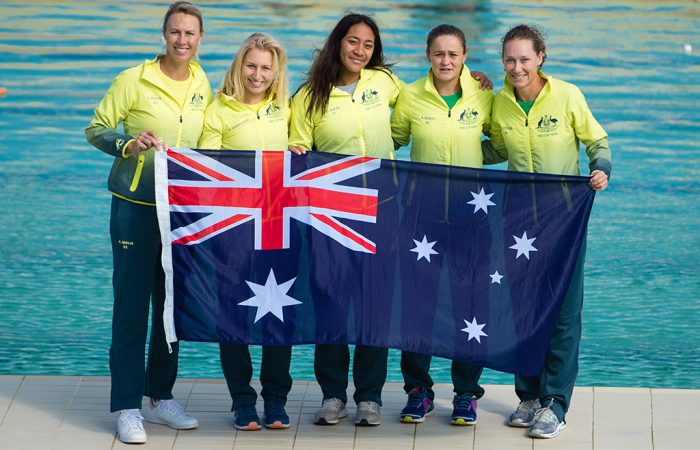 Alicia Molik is backing Ash Barty and Sam Stosur to pilot Australia back into the Fed Cup elite after naming the pair for both singles and doubles duties in this weekend’s World Group Play-off with the Netherlands.

The Australian captain denied pulling a selection shock despite preferring Stosur over the higher-ranked Daria Gavrilova as her No.2 singles player for the indoor hardcourt tie in Wollongong.

> RELATED: Stosur hoping to get hosts off to a flyer

With the option of changing her line-up before Sunday’s reverse singles, Molik indicated she’d likely call on Gavrilova if Barty and Stosur put the home team 2-0 on Saturday and within sight of promotion to the eight-nation World Group for the first time since 2015.

In the absence of their top four players, including big-hitting French Open semi-finalist Kiki Bertens, the Dutch accept the heavy underdogs’ tag as Molik looks to take command of the tie from the get-go.

“The players we have fronting up tomorrow have been in this situation and been able to succeed many times over and that’s why they’re playing on the first day,” Molik said after Friday’s draw.

“That’s a real advantage; to have the experience and the runs on the board.”

No one has more experience or runs on the board than Stosur, who, with 27 wins already under her belt, is the most successful singles performer in Australian Fed Cup history.

Despite being on the comeback trail from an injury-hit 2017 season and wearing the green-and-gold for the first time in almost two years, the former US Open champion looms as a trump for Australia.

The former spearhead faces world No.210 Lesley Kerkhove in Saturday’s opening rubber before Barty plays the 295th-ranked Quirine Lemoine in the second match.

Victory over Kerkhove would leave Stosur – who’s also unbeaten in seven Fed Cup doubles rubbers – with the second-most total wins for Australia in the competition behind only Wendy Turnbull.

“That’d be pretty special if I could manage to do that,” the 34-year-old said. “Hopefully I can get the team off to a good start and play well.

“It’s no guarantee or anything, having done it before, but it’s a nice feeling knowing I’ve played lots of Fed Cup matches and know what it’s going to feel like.”

Barty, the tie’s highest-ranked player at world No.19, and Stosur have been named to play Demi Schuurs and Indy de Vroome in Sunday’s doubles, a potential tie-decider but also a possible dead fifth rubber at the Wollongong Entertainment Centre.

Molik believes Australia deserve to be back in the World Group in 2019.

“We’ve got the dynamics in the team – not just the camraderie – but the versatility as well beginning with the four players here to really make an imprint on the Fed Cup next year when we’re in a position where we can actually vie for the title,” she said.