Now entrenched in the world's top 20, Ash Barty is increasingly comfortable with her status as one of the world's best tennis players and role as spearhead of Australia's Fed Cup team. 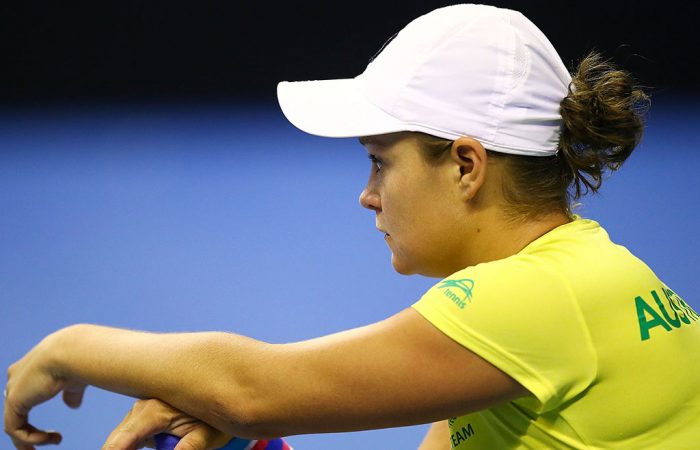 As Australia’s No.1 singles player for this weekend’s Fed Cup tie in the Netherlands, Ash Barty will look to build on an already sparkling record.

The 21-year-old Queenslander, who has played seven ties for the green-and-gold since her Fed Cup debut in 2013, has an imposing 9-2 win-loss record in the team competition – including a 4-1 record in singles.

Now the unofficial spearhead of the team – a mantle for a long time held by Sam Stosur – Barty was instrumental in helping send Australia through to the World Group Play-off stage, winning all three of her rubbers in the nation’s win over Ukraine in February in Canberra.

Almost two years into her fully-fledged comeback to professional tennis, Barty admitted at Friday’s Fed Cup draw ceremony that she’d found her niche as a competitor on tour.

“Early last year I knew that my tennis certainly had top-20 capabilities, but the consistency wasn’t there,” Barty, who peaked at No.16 in January, told tennis.com.au.

“Towards the end of the year (2017) and especially in Wuhan, I probably felt it the most, where I played top-20 tennis for the whole week. And that was sort of the first time I’d touched on it … It was a great week.

“I’m a big believer in that your ranking reflects where you are. It truly does. And I think the top 10 is a different level. Yes, I know I’m capable of beating top-10 players, but I feel like where my ranking sits is a true reflection of where I am in the world, and what my level of tennis is.

“I know that on my day I can certainly beat top-10 players.”

Currently ranked 19th, Barty’s rise in the WTA standings has coincided with an increased understanding of how to pace herself during a gruelling 10-month season involving lengthy stints on the road.

Close to her family and relishing her time at home, a teenaged Barty was struggling with homesickness and burnout when she stepped away from the game in 2014.

More mature and with a renewed passion for the sport, she knows the key to survive – and thrive – on tour.

“I think last year I did a much better job of planning out a schedule to make sure I could get home, because I am very much a homebody. And yes, I probably did take a few more flights than were necessary, but for me it was necessary.”

After Fed Cup, Barty will head to Europe for the clay and grass seasons with a massive opportunity to continue her climb.

“I think the level of tennis is there. It’s just doing that week in and week out. And especially at Slams for me,” Barty said.

“I think that’s where you can make some massive jumps and I’ve had a couple of good Australian Opens and a good US Open last year but in the middle period of the year I felt like I missed out a little bit.

“I feel like when I really get that consistency throughout the whole year, at the level of tennis I know I can play, is when we can maybe start jumping up the rankings a bit more.”