Gavrilova on Fed Cup: “I almost try too hard” 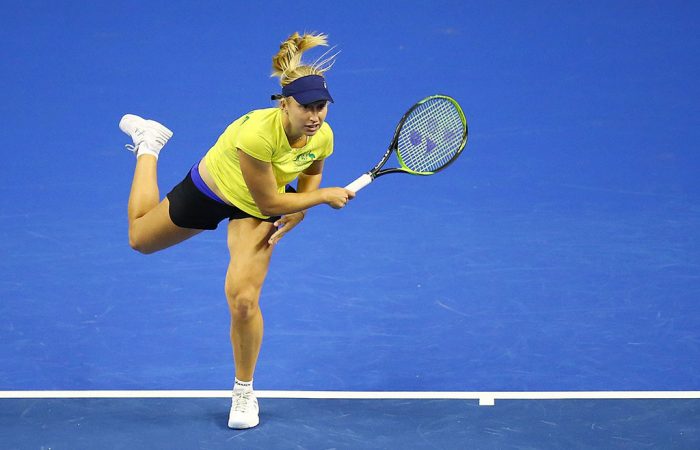 The Aussie had not long earlier completed a serious hit-out with Sam Stosur on Wollongong’s indoor hardcourt, with an eye towards selection for this weekend’s Fed Cup tie against Netherlands.

One of her main motivators? Improving on her career record in the team competition, which at this moment stands at 2-6.

“I feel like I always have to – even though everyone’s here for me and supporting me – show my best and I always almost try too hard,” she revealed to tennis.com.au.

“But I thought the other day I almost had the best Fed Cup practice (of my career) because sometimes I get distracted or I feel the pressure. It’s very different – I’m still learning.

“I definitely want to improve on 2-6, I don’t think it’s great (laughter). Hopefully I’ll get picked this tie and get a few wins. It is in the back of my head all the time.

“I haven’t had the success I’ve wanted so I’m really hungry to get better.”

Gavrilova lost on her Fed Cup debut to the United States’ Madison Keys in 2016, a match played on clay in Brisbane. She also lost both of her singles rubbers in February this year when Australia tackled Ukraine on grass in Canberra.

But the two live singles rubbers she did win – against Serbia in 2017’s World Group II Play-offs – came on an indoor hardcourt similar to the one she’s playing on this week in Wollongong.

Gavrilova said during Thursday’s press conference that switching from another surface and different conditions to indoor hard court was a fairly straightforward adjustment to make.

“We’ve found this court pretty nice and it’s playing pretty much perfect. So it wasn’t very hard at all (to adjust),” she said.

And she’s now into the swing of another Fed Cup week, a team environment which she relishes.

“We don’t have much ‘me’ time but I really do enjoy being around the team,” Gavrilova said.

“We always have lunch and dinners together. A lot of chats, very social (smiling). And we practice together, doing all the warm-ups, so everything is together as a team.

“But everyone is also focusing on their individual programs in the gym, or when we’re on court someone has to work on one thing, so we’re gonna help them out and be their hitting partners for a little bit. We are having warm-ups together, so (it’s) a bit of fun there.

“It’s pretty full on. Especially after it’s over with matches, you feel pretty exhausted. But I always enjoy it a lot and I always get super excited.

“When we’re on the road we’re pretty much just one-on-one with the coach and it’s hard to organise everyone to have dinner together, because everyone’s on a different schedule. So I really enjoy that part.”