Stosur hoping to get Aussies off to a flyer

Back in the Australian Fed Cup squad for the first time in two years, stalwart Sam Stosur is hoping to get the host nation off to the perfect start on Saturday in Wollongong. 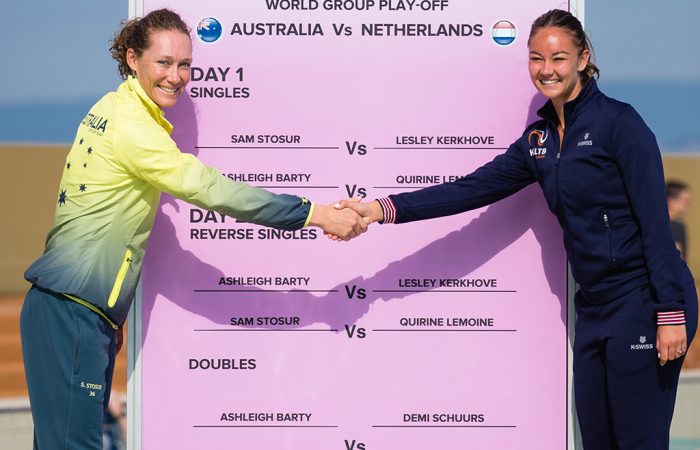 The last time Sam Stosur played Fed Cup, she was Australia’s No.1 player, well inside the top 30 and spearheading a relatively experienced team.

How things have changed two years on.

The Queenslander, playing her first tie since Australia’s loss to the United States in the World Group Play-offs of April 2016, arrived this week in Wollongong ranked 58th, the third-ranked Aussie behind young duo Ash Barty and Daria Gavrilova.

“I think the general set up of everything is still the same,” Stosur said of returning to the Australian team environment.

“Probably the biggest change is all the players, to be honest (laughter). Which is a big part. But just the general feel for everything is as good as it ever has been.”

“For sure it’s a little bit different (coming in as the No.3-ranked player). I certainly didn’t come here this week feeling 100 per cent (certain) about even playing on the weekend.”

Following an excellent week of practice on Wollongong Entertainment Centre’s indoor hard court, Stosur was selected for singles duty ahead of the 24th-ranked Gavrilova, and is expected to combine with Barty in Sunday’s doubles rubber.

She’ll open the tie against Dutch No.1 Lesley Kerkhove, a 26-year-old ranked No.210 and a player Stosur admitted to knowing little about when the draw was conducted on Friday.

“It is a great boost in confidence and belief from the team that they put me in and I think a lot of that goes down to my experience of being in this position so many times,” said Stosur, who owns the most singles victories of any player in Australian Fed Cup history.

“But that’s certainly not to say Dasha hasn’t had a great week on court and didn’t deserve to be out there either.

“It’s a great thing to have so many choices … in other ways it’s hard to have someone miss out who’s definitely very worthy of that position as well.

“I’ll certainly try and do everything I can out there to prove my worth now I’ve been put in that position, and try and get the team off to a good start.”

Being the eldest member of the team – Stosur is 10 years older than Gavrilova, the next-oldest player in the squad – and with the recent retirement of another stalwart in Casey Dellacqua, Stosur is now regarded as the “mother hen” of the team.

Both Barty and Gavrilova has spoken openly of their admiration for Stosur, a US Open champion and former world No.4 who’s also reached four semifinals at Roland Garros (going on to the final in Paris in 2010).

Recognising she’s a role model for her compatriots is something to which Stosur has taken time to adjust.

“Even a couple of years ago, I was still one of the older ones, and experienced and everything, but probably not as ready to take on some of that responsibility and feeling like that,” she admitted.

“I don’t know (why I felt that way) – it’s just a different position. I’m generally the younger one; even through juniors I always played up an age group and I was never that person.

“But I certainly do feel (more comfortable in) that way now, and obviously that’s very nice of those girls to say what they say about me. It’s not like Ash and Dash don’t know what’s going on and how to handle themselves and being out on tour and everything … I can learn heaps of things from them as well.

“Dasha’s told me that (she looks up to me) a few times – she even wrote it in my birthday card, which was pretty sweet.

“I think it’s a real privilege to be in that position, and yeah, it’s a great feeling.”