Now Australia's third-ranked singles player, Sam Stosur will be happy either competing on court for Australia or cheering from the sidelines during this weekend's Fed Cup tie against the Netherlands. 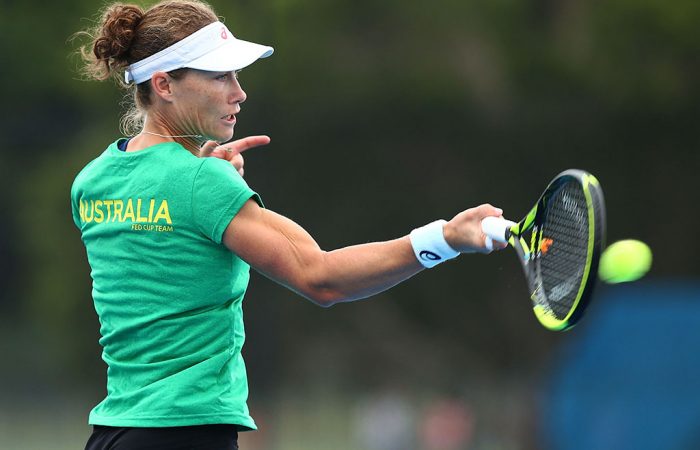 Peeling oranges or playing for points, Sam Stosur will fill whatever role is required when she makes her Fed Cup comeback this weekend.

Stosur hasn’t worn the green and gold for two years but returns for Australia’s World Group Play-off against the Netherlands in Wollongong.

With 29 victories since debuting at the same indoor venue way back in 2003, the 34-year-old is the most prolific singles winner in Australian Fed Cup history.

> AUSTRALIA V NETHERLANDS: get your tickets!

But with young guns Ash Barty and Daria Gavrilova now entrenched in the world’s top 25, the 58th-ranked Stosur finds herself in unfamiliar territory as the country’s No.3 singles player.

Australian captain Alicia Molik is likely to use the veteran former spearhead for doubles duties, with Stosur seven from seven in Fed Cup doubles and the perfect replacement for the recently retired Casey Dellacqua.

“I’m just going to go out there and practice as best as I can. We’ve got a great team, so no matter who gets on the court, hopefully we can do well,” Stosur said on Tuesday.

“If I play, that’s fantastic. If I don’t, I’ll be happy to sit on the sidelines and cheer and support the team that way.”

Success over the depleted Dutch – who are without their four top players – would vault Australia back into the eight-nation World Group for the first time since 2015.

Stosur admits helping Australia to a first title since 1974 would be a career highlight.

“It is a hard competition and there’s a couple of countries that have really had stand-out years in recent times, with the Czechs and Italians winning it a lot,” the Queenslander said.

“There’s so many great teams out there. If we were in the position, it would be fantastic, not just for our team but I think tennis in general in Australia.

“It would be super exciting.”

With 2016 French Open semifinalist Kiki Bertens and the Netherlands’ only other three players ranked inside the top 100 opting out of the tie, Dutch captain Paul Haarhuis is pinning his faith on little-known quartet Lesley Kerkhove, Quirine Lemoine, Demi Schuurs and Indy de Vroome.