Sam Stosur and Destanee Aiava could challenge for the singles spots in this weekend's Fed Cup World Group Play-off. 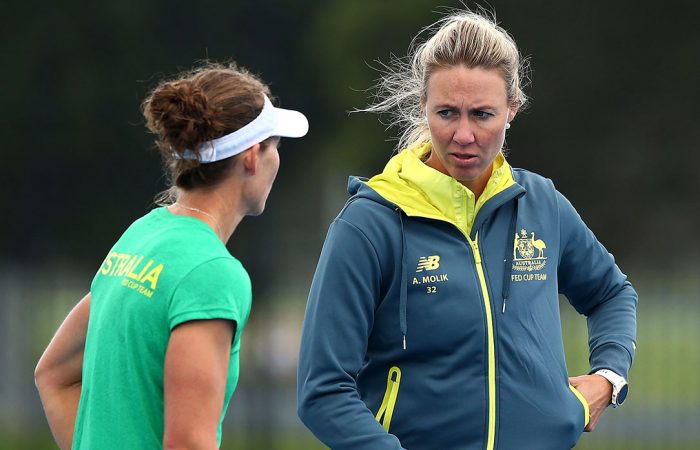 Australian Fed Cup captain Alicia Molik expects ‘healthy’ competition within her team as it prepares for this weekend’s World Group Play-off against the Netherlands in Wollongong.

Although world No.19 Ash Barty and No.24 Daria Gavrilova are the highest-ranked singles players in the Australian team, Molik is expecting US Open 2011 champion Sam Stosur and in-form Destanee Aiava to challenge for the coveted singles spots.

Stosur is one of the most decorated Australian Fed Cup players in history with 29 singles rubber wins, while 17-year-old Aiava won her first professional title on international soil last week.

“We’re here to play and hopefully win on the weekend, so we need to prepare really well,” Molik said.

“I really enjoy it when there is competition (for places) throughout the week, so we can make sure we select the players that are in the best form. Although Ash is leading the pack, we’ve got a player like Destanee, who despite being the No.4 player in our team, has come off a lot of matches in succession and just won a title in Japan on Sunday.

“I think it will be really competitive (to play singles). It’s healthy.”

Molik admits that while her team is a red-hot favourite to secure a return to the elite eight-nation World Group, it could not afford to underestimate a Dutch team missing its highest-ranked players.

“If you look at where our team are ranked, with Ash sitting inside the top 20, yes we are expected to win but it’s another thing to get the job done,” Molik said.

“I have experienced firsthand what the Dutch are able to produce and quite often in Fed Cup rankings go out the window. When the pressure isn’t on, it is amazing what some players can produce. We’ve been on the receiving end before, so that’s a good reason for us to be completely prepared for this weekend.”