Molik: “Fed Cup win within sight for us now”

Captain Alicia Molik is thrilled to have a strong squad of players from which to choose as Australia takes on the Netherlands for a place in the Fed Cup World Group. 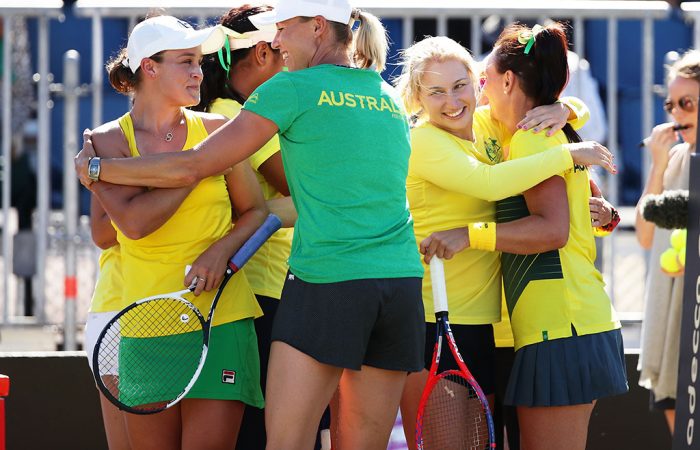 Australia captain Alicia Molik believes her team has a realistic shot at going all the way to the Fed Cup trophy as they prepare to take on the Netherlands.

Wollongong will stage the contest on 21-22 April, with a return to the elite eight-nation World Group in 2019 at stake.

Ticket packages are now on sale for the tie via Ticketmaster.

“It’s huge because it’s within sight for us now,” Molik told tennis.com.au.

“We’ve had some disappointing ties and it can take a year or two to get back up. But there’s no question, I believe that our team should be in the top eight nations in the world. They definitely deserve a shot to win the Fed Cup and that’s what we’d like to do next year.”

Australia beat Ukraine 3-2 in February on a purpose-built grasscourt in Canberra to reach the World Group Play-off stage of the competition.

Standing between them and a place in next year’s World Group is the Netherlands.

The Dutch squad beat Australia in their last meeting, on clay in ‘s-Hertogenbosch three years ago, but this time around it’s on Australian soil on an indoor hard court.

The two teams have a history in the same city; in 2002, Australia pipped the Netherlands 3-2, and also beat Colombia at the same venue a year later.

Molik was part of both winning teams in Wollongong and has fond memories of the host city. And in 2018, she has a strong team at her disposal to hopefully replicate those winning results.

“If you look at our players – Ash (Barty), Dash (Daria Gavrilova) and Sam (Stosur) as a past (Grand Slam) champion – it’s pretty amazing that they can come to Wollongong and form part of our team,” Molik said.

“Sam is definitely available for this tie, which is absolute music to my ears. And of course Ash and Dash leading the charge as our No.1 and No.2 singles players, they’re both available as well. Then it’s deciding who the fourth player is, which is always tricky.

“I think it’s a good problem to have. And that’s what I always promote – healthy competition within the team. That’s when you are able to get the best out of each other. It won’t be any different during this tie in Wollongong.”

Staging the tie in a regional centre, rather than in a major Australian city, is something Molik strongly supports.

“It’s a chance for some kids that love tennis who don’t necessarily to have the ability to travel to the Australian Open to still witness up close and personal world-class tennis,” she said.

“They’re the positives that I see.”