In a commanding display by one of the world's best doubles teams, Ash Barty and Casey Dellacqua combined to defeat Ukraine's Kichenok twins to seal victory for Australia in Fed Cup. 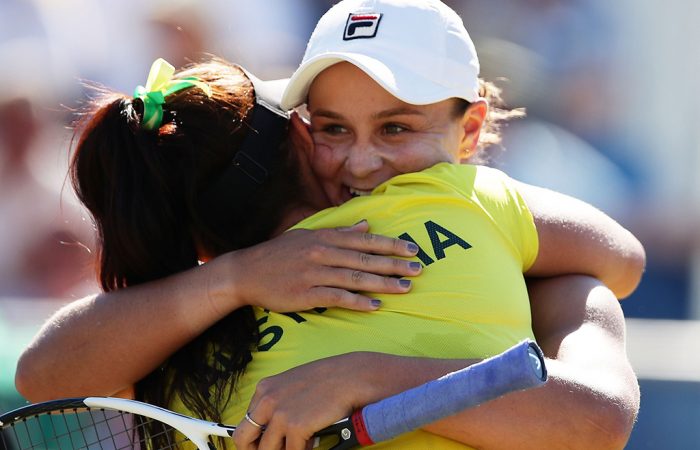 Casey Dellacqua has helped deliver a Fed Cup victory for Australia on her 33rd birthday, teaming up with Ashleigh Barty to win the deciding doubles match against Ukraine in Canberra on Sunday.

Barty was involved in all three victorious rubbers for Australia after winning her singles matches on Saturday and Sunday.

“It was nice to come out and use a little bit of our experience and get over the line in the end,” Barty said.

The 3-2 tie victory means Australia moves into the World Group play-offs later in April, putting them one win away from the Fed Cup’s top-eight World Group nations for the first time since 2015.

The tie was pushed into a fifth match after Daria Gavrilova was sensationally upset for the second time in a singles rubber this weekend.

World No.26 Gavrilova went down to the unranked Nadiia Kichenok, who was subbed in by Ukraine captain Mikhail Filima for her twin sister Lyudmyla only minutes before the reverse singles match.

Barty steamrolled teenage sensation Marta Kostyuk 6-2 6-3 on Sunday to give Australia a 2-1 lead.

Kostyuk, 15, defeated Gavrilova in straight sets on Saturday, squaring the tie at 1-1 after Barty had survived an early scare against Lyudmyla Kichenok to win 4-6 6-1 6-4.

Dellacqua was emotional after the victory, sharing a heartfelt hug with Barty and team captain Alicia Molik and breaking down in tears on her courtside chair.

“There’s nothing more special than being out here representing Australia, especially on my birthday and with my best mate (Barty), with my team, with my family here, so it’s really special and something I’ll remember,” Dellacqua said.

“(Winning the Fed Cup) would be a dream com true. For all the young Australian girls out there playing at the moment, I hope you dream of playing for Australia and being part of this team, because I can honestly say with my hand on my heart it’s the most memorable experiences of my life. I just cherish wearing the green and gold.

“I know Fed Cup is on all of our agenda so I hope we can get that job done.”