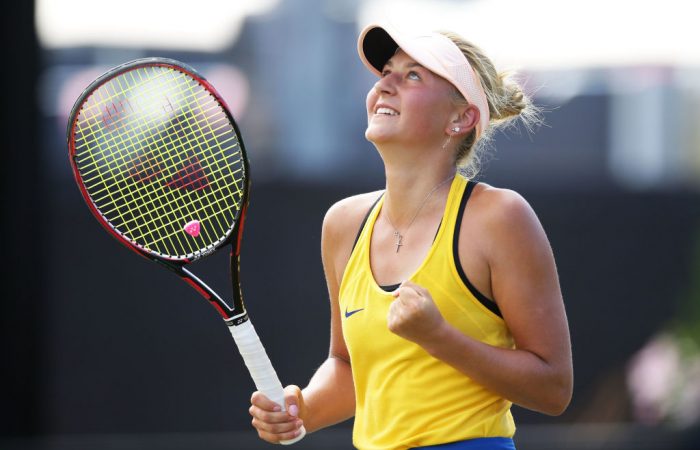 Ukrainian teenage prodigy Marta Kostyuk has locked up the Fed Cup tie against Australia at 1-1 with a straight sets defeat of Daria Gavrilova in Canberra.

Kostyuk, 15, prevailed 7-6 (7-3) 6-3 against the world No.26 to win the second rubber for Ukraine after Australian No.1 Ashleigh Barty survived an early scare in the opening match on Saturday.

Kustyok took the first set after an incredible eight breaks of serve, including seven in a row, but the Ukrainian grew in confidence as the match went on.

The teenager, who is playing as Ukraine’s No.1 in this tie, was making her Fed Cup debut. Gavrilova said she would be better equipped for the reverse singles having played a match on the grass court.

“I was pretty nervous and I definitely didn’t play my best,” Gavrilova said.

Earlier, Barty dropped the first set against world No.883 Lyudmyla Kichenok in the World Group II tie but responded to win 4-6 6-1 6-4.

The first set was filled with unforced errors as the players attempted to adjust to the temporary grass court.

Kichenok, who has been ranked as high as 156, took it right up to Barty and sent some nerves into the Australian camp before the world No.16 took control of the match.

Barty said she was excited and nervous heading into her first Fed Cup singles rubber on home soil.

Kichenok said “it’s not Wimbledon, for sure” when asked post-match about the state of the court.

Ukraine defeated Australia in their Fed Cup tie last year, but the visitors are witho