Ash Barty was pushed all the way by a gallant Lyudmyla Kichenok but had enough weapons and grasscourt nous to secure a three-set win in Canberra on Saturday. 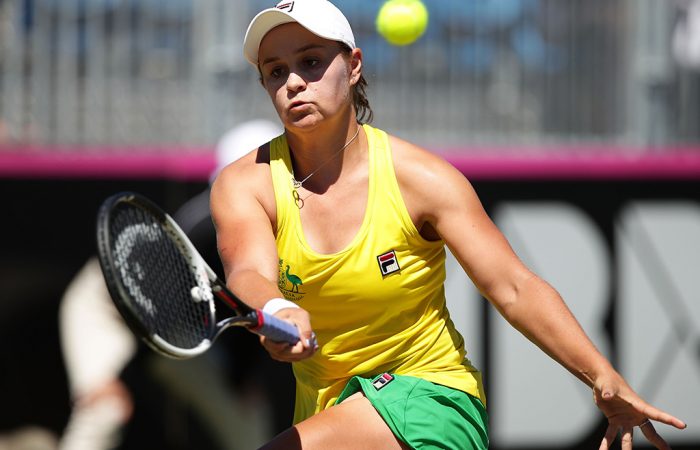 Ash Barty survived a scare against Lyudmyla Kichenok before wrapping up a three-set victory to give Australia an early lead in its Fed Cup tie against Ukraine.

Barty’s 4-6 6-1 6-4 victory puts Australia up 1-0 in the World Group II tie, being staged on grass in Canberra before what was a packed crowd on Saturday.

Barty was scratchy early, struggling with her rhythm and timing while her opponent – ranked No.883 in singles but in the world’s doubles top 50 – looked very much at home on the temporary grass court.

But cutting out her errors in the second set and improving her serving performance, Barty levelled the match and then scored an early break in the third to wrest control of the contest.

She maintained her advantage, and although she let slip match points in the penultimate game, she served out the match in style, sealing victory with a booming forehand winner.

“It certainly wasn’t my cleanest tennis throughout the whole match, but it’s obviously nice to come through and get us off the the perfect start,” Barty said.

“I’ve had a bit of a slow start in all of my previous matches (in 2018), losing the first set, so hopefully that doesn’t happen tomorrow.

“It’s very nice to be back on grass, I feel most comfortable and most at home on the grass court. I think I was able to come through and use a little bit of experience in the end there.”

Daria Gavrilova will next face Ukrainian young-gun Marta Kostyuk for a chance to give Australia a commanding 2-0 lead.

Ukraine defeated Australia in their Fed Cup tie last year, but the visitors are without world No.3 Elina Svitolina this time.