The Australia v Ukraine Fed Cup tie is going to a fifth and decisive doubles rubber after Nadiia Kichenok stunned Daria Gavrilova on Sunday in Canberra. 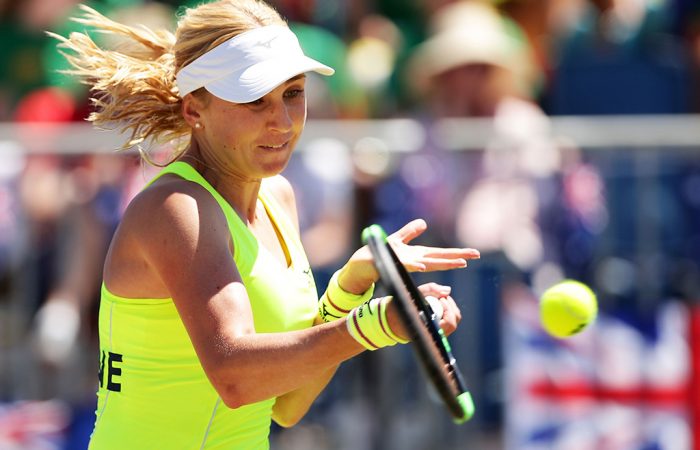 Nadiia Kichenok has upstaged Daria Gavrilova the second of the reverse singles rubbers to keep Ukraine alive in its Fed Cup tie against Australia.

Kichenok, a late substitute for sister Lyudmyla, recovered from the loss of the first set to beat Gavrilova 4-6 6-2 6-3.

The result means the World Group II first-round tie is locked at 2-2 and must be decided by the doubles rubber.

Casey Dellacqua and Ash Barty – who earlier on Sunday beat Marta Kostyuk to give Australia a 2-1 lead – will combine in the hope of delivering Australia victory in Canberra.

Kichenok is currently unranked in singles; she last played a singles match in February 2017 and has since concentrated solely on doubles.

But she played a brilliant grasscourt match, serving big, hitting flat penetrating shots and keeping calm as the match arrived at a tense conclusion.

“I have to think about it now – should I come back again?” she laughed as she considered re-booting her singles career.

“It’s tough to play against Daria, she’s tough player. But Fed Cup, my team, the spirit, was keeping me going, and yeah, here we go. Doubles now.”

She will team with twin sister and regular partner Lyudmyla to take on Barty and Dellacqua.

She held a whopping eight set points in a dramatic ninth game before Kichenok escaped with a service hold, yet the Aussie re-focused and served out the opening set on her 10th set point.

Gavrilova’s level dipped significantly at the beginning of the second at the same time Kichenok started to land more of her stinging shots, and the Ukrainian built a 4-1 lead.

A few games later she’d sent the match to a third set, which progressed game for game until 3-4, with Gavrilova serving.

She’d held a break point in the seventh game but couldn’t convert – she finished 1/12 on break points throughout the match – and when Kichenok broke for a 5-3 lead, it took the wind out of Gavrilova’s sails.

She saved two match points but couldn’t hold off a third, committing her 25th unforced error to hand Kichenok a stirring victory.