Barty first up for Aussies in Fed Cup

As expected, Ash Barty and Daria Gavrilova will represent in Australia in the two singles rubbers on Saturday against Ukraine in the World Group II first round Fed Cup tie in Canberra. 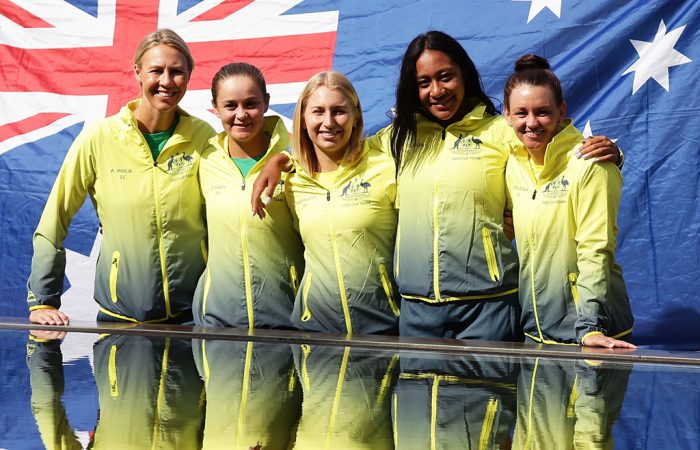 Captain Alicia Molik has declared the Australian Fed Cup team the strongest in years leading into this weekend’s tie against Ukraine.

Australia enter their World Cup II tie as heavy favourites with the visitors arriving in Canberra severely understrength, most notably without world No.3 Elina Svitolina.

Australia’s world No.26 Daria Gavrilova will come up against Kostyuk in the second singles match at Canberra Tennis Centre on Saturday.

World No.16 Ashleigh Barty will get Australia underway against outsider, Lyudmyla Kichenok, who is ranked 883, after the draw was announced on Friday morning in the beautiful setting of the National Gallery of Australia.

Molik said the team had embraced the favourites’ tag and was pleased with the form of Barty and Gavrilova.

“It’s been a long time since our top two singles players have won WTA events only a couple of months leading into the Fed Cup,” Molik said.

“That’s a pretty strong indication that they know how to win big tournaments, Casey (Dellacqua) included, and I’m sure Destanee (Aiava) will get there very soon.”

Australia have not won a Fed Cup title since 1974, but Molik said this week the current group should be breaking the drought in the next two years.

As expected, Barty will back up in the doubles on Sunday with Dellacqua to form a fearsome combination for Ukraine’s pairing of Nadiia Kichenok and 14-year-old Dasha Lopatetskaya.

In the reverse singles on Sunday, Barty will again take to the court first when she does battle with Kostyuk, with Gavrilova to follow against Lyudmyla Kichenok.

Gavrilova said she well aware of Kostyuk’s prodigious talent and would be wary of her opponent on Saturday.

“She’s (Kostyuk) playing beyond her age and is going to have a bright future,” Gavrilova said.