Casey Dellacqua revealed she'd be "the happiest girl ever" if Australia could win the Fed Cup. The Aussies begin their quest to return to the top against Ukraine this weekend in Canberra. 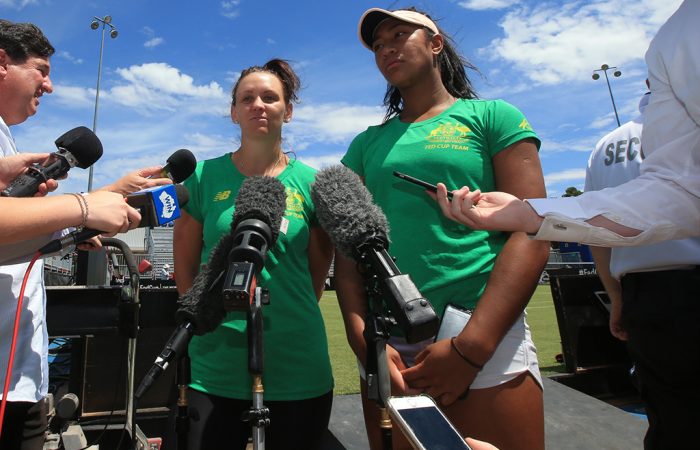 The belief among the Australian Fed Cup team is that the squad is good enough to belong in the eight-nation World Group. And even good enough to win the entire competition.

That’s what Australian captain Alicia Molik said on Monday. And that’s what team stalwart Casey Dellacqua reiterated when she spoke to the press on Thursday in Canberra.

On Saturday, Australia begins what is a two-year quest for the Fed Cup title.

The team faces Ukraine in the first round of World Group II, with the winner advancing to a play-off tie to secure a place in the elite eight-nation World Group in 2019.

From there, it would take another three winning ties to deliver the prestigious international women’s team trophy back to Australian soil for the first time since 1974.

It’s a huge motivator for Dellacqua, who first competed for Australia back in 2006 and who has played 20 ties in the green-and-gold.

“I have always wanted to play Fed Cup ever since I was little girl,” she said.

“Throughout my whole career I have always made it a priority, I put it in my schedule. It was something I dreamed of doing. I’m thrilled that at my age now that I’m still playing and still a part of this team. If we were able to win the Fed Cup I would be the happiest girl ever.

“For me, growing up with team sports, I’ve had a lot of great individual achievements but there is nothing more special than playing for your country. Makes me really proud.

“And hopefully this (tie against Ukraine) is the first step to rebuilding and getting ourselves back there. We got to the semis (of the World Group) a few years ago – it would be amazing to go one step further.”

Despite no longer playing singles, Dellacqua forms half of one of the world’s best doubles pairings, alongside countrywoman Ash Barty.

Doubles is positioned as the fifth rubber in Fed Cup ties, meaning it is often not a live rubber after four singles matches have been played.

But the West Australian said she would be ready to go should scores be locked at 2-2 on the final Sunday.

“Not many times in my career have I played many live rubbers. I played a couple. They’re very exciting if it does come down to the doubles,” she said.

“It’s a lot of pressure for the doubles player to sit around all weekend and then all of a sudden have to get yourself up.

“When the matches start (on Saturday), that’s when the excitement really hits home. Hopefully we get a lot of people coming out here in green and gold and supporting us on the weekend.”