Teenage sensation Marta Kostyuk goes into the weekend's tie in Canberra as Ukraine's top player - yet having never before played a Fed Cup match. 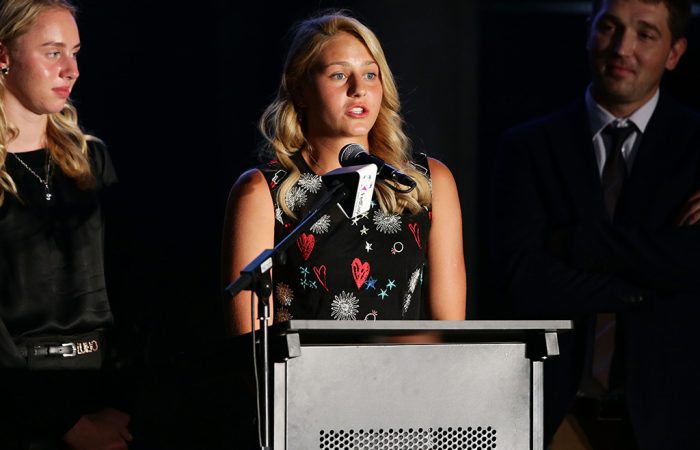 Marta Kostyuk is about to finish high school, and will start her university studies next year, despite not turning 16 until June.

“It’s good. I finish early,” smiles the Ukrainian prodigy whose tennis graduation is also proceeding at a cracking pace.

Kostyuk’s agent is Roger Federer’s co-coach, Ivan Ljubicic, and the Fed Cup debutante has already earned star billing as the rankings leader of the depleted Ukranian team to contest this weekend’s grasscourt tie against Australia in Canberra.

Thursday’s headlines had both captains – Mikhail Filima and former world No.8 Alicia Molik – offering, or at least acknowledging, comparisons between Kostyuk’s stunning progress and that of five-time major winner Martina Hingis.

The Ukrainian’s reaction to what, in some respects, is old news? “Of course it’s amazing that people are comparing me to such a big tennis player, but I’d love to stay myself.”

Understandably. Just a month ago, Kostyuk was ranked in the 500s, battling through qualifying at a lowly Futures event in suburban Adelaide. Then, at Melbourne Park, the 2017 girls’ champion and qualifying wildcard made a stunning run past 25th seed Shuai Peng and Olivia Rogowska that was ended only by her fourth-seeded compatriot Elina Svitolina.

Hingis, naturally, had been the last player so young to reach the Open’s third round.

Next stop: Burnie, for a $60,000 ITF event in which she beat Swiss No.1 seed Viktorija Golubic. And so, when the WTA rankings list was announced on Monday, Kostyuk’s career-high mark of 185th made her the youngest member of the top 200 in almost a decade. “I didn’t expect that fast jump, big jump,’’ she admits.

The national No.7’s Fed Cup call-up has also come so “super-soon” that she did not even dare to dream of such an accelerated time-line. Still, the team environment is Kostyuk’s favourite kind, and she has been successfully wearing the Ukrainian national colours since her celebrated junior days.

The Croatia-based baseliner is a refreshing interview subject, admitting when asked if she felt older than her 15 years that “sometimes yes, but sometimes I think ‘oh God, why am I only 15. I want to be older’. But it’s normal, I think, in my age’’.

Slightly confusing, too, is her official status as the Ukrainian No.1 for this tie against top-30 pair Ash Barty and Daria Gavrilova, while yet to play a senior Fed Cup match.

“Well, it’s tough a bit mentally, especially on the practices and out of the team,’’ Kostyuk admits. “From one side I’m like first in the team, and from other side, I’m really not, so it’s weird, you know, sometimes.’’

She knows how the duo known as Ash’n’Dash play, but has little experience against anyone on grass – pointing out when her junior Wimbledon semifinal is mentioned that it was doubles, not singles, and that the value of advice on how to play on the surface is limited, because people can only tell her what to do, not what to feel.

Yes, her Australian results have been outstanding, but this is new turf. Literally. “It’s different surface now, so it’s a bit tough to say very confident that I’m confident,’’ Kostyuk quips. “But, yeah, I am.’

“When I was playing juniors I didn’t think how exactly I have to play on this surface, so now I’m trying to understand more. But I think I can play great on grass.’’

This, certainly, does not sound like someone who is feeling the pressure of heightened expectations. Kostyuk is adamant that, with still another year of tournament restrictions due to the WTA’s age eligibility rules, she is not, and does not expect to – except perhaps in Grand Slam qualies – any time soon.

So, along with those outstanding results, fearless audacity appears to be in natural, youthful abundance. Which is not something even a star student can be taught.