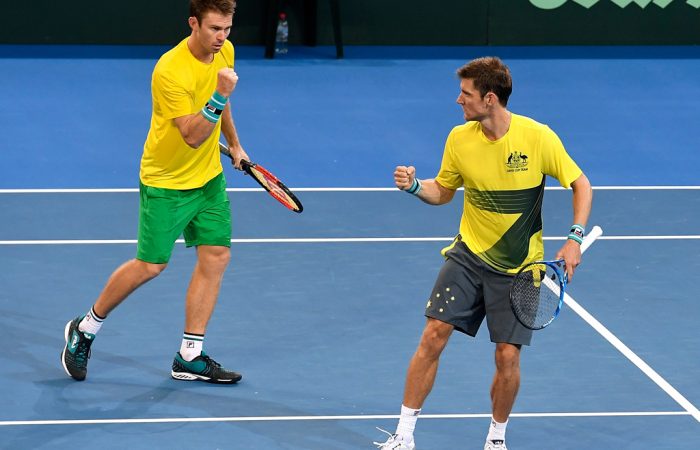 Germany has grabbed a 2-1 lead over Australia in the Davis Cup first-round tie in Brisbane, with Matthew Ebden and John Peers losing the doubles rubber in five sets.

The visitors sprang a late change on Saturday, replacing Peter Gojowczyk with Jan-Lennard Struff. But, it was doubles partner Tim Puetz who proved the difference in the 6-4 6-7 (1) 6-2 6-7 (4) 6-4 win at Pat Rafter Arena.

World No.14 Nick Kyrgios and rookie Alex de Minaur must win their reverse singles rubbers on Sunday for Australia to move through to April’s quarter-finals.

Australian No.1 Kyrgios will take on world No.5 Alex Zverev, while debutant de Minaur – just 18 – is set to face Struff.

“We’re a long way from beaten that’s for sure,” said the Australian team captain, Lleyton Hewitt.

“Tomorrow’s going to be a big day and the boys will be up for it. We’re going to look forward to this challenge.”

Hewitt hinted he might have played in Saturday’s doubles but resisted the temptation, pairing Ebden with world No.4 doubles specialist Peers.

The pair showed former world No.1 Hewitt’s trademark fight, clawing their way back from two sets to one down to force the Germans to scramble.

But it was 30-year-old journeyman Puetz – in just his second Cup tie – who stood tall, thrashing forehand winner after forehand winner as Germany prevailed in a rubber lasting almost four hours.

Puetz, ranked  No.144 in the doubles rankings, made his Cup debut last year when he combined with Struff to deliver a key five-set doubles win against Portugal to help Germany seal victory.