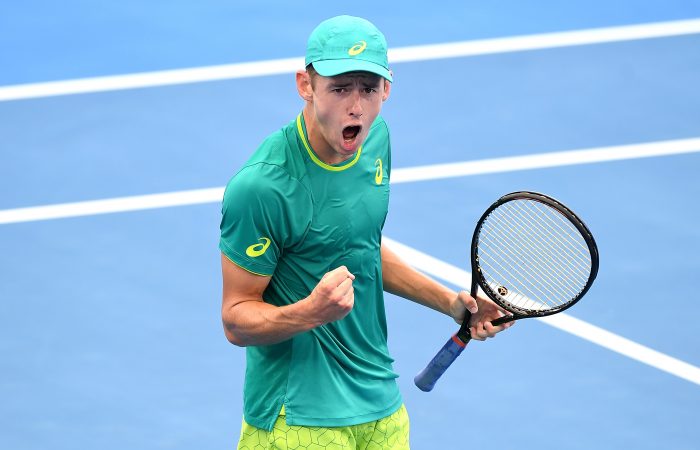 Teenage sensation Alex De Minaur has been named in Australia’s five-man team for the highly anticipated Davis Cup by BNP Paribas World Group First Round clash against Germany at Pat Rafter Arena in Brisbane next week.

The 18-year-old will join Australian No.1 Nick Kyrgios, Jordan Thompson, John Millman and doubles specialist John Peers when they don the green and gold.

Matt Ebden who defeated world No.16 John Isner in the first round of the Australian Open and South Australia’s Alex Bolt will also travel with the team as hitting partners.

Germany are yet to confirm their team but the likes of Alexander and Mischa Zverev, Philipp Kohlschreiber, Jan-Lennard Struff and Peter Gojowczyk could be named. A blockbuster singles clash is expected between Kyrgios and world No.4 Alexander Zverev, two of the world’s most talented young players on the tour.

“We have named Alex De Minaur in the five-man team after an impressive couple of weeks on the tour. He has worked hard and we are pleased to give him this opportunity,” Australian Davis Cup captain Lleyton Hewitt said.

“It will be a tough tie against a strong German side but the team will carry some quality wins in Australia into this first round match up.

“Nick comes off a title win at Pat Rafter Arena and a fourth round appearance at the Aussie Open so we’ll be looking to channel his experience when we return to Brisbane.

“Brisbane is also home for Johnny Millman and both Jordan Thompson and John Peers have had success on that court in singles and doubles.

“Jordan won his singles match against the US last year and both he and John have won the Brisbane International doubles titles independently two years in a row. We’ll be ready to go when everything gets underway in ten days’ time,” Hewitt added.

De Minaur, who reached a career high of 127 this month has had an incredible start to the year making the semifinals at the Brisbane International and the finals of the Sydney International before his second appearance at the Australian Open.

The Sydneysider has defeated the likes of world No.23 Milos Raonic, world No.38 Feliciano Lopez and world No.40 Fernando Verdasco in the space of three weeks.

In 2018 the Davis Cup will trial five-man teams in both World Group and Zone Groups I and II.

Three-day tickets to this tie are on sale via Ticketek. Tickets are $150 for adults, $25 for children and $325 for a family pass.

The Queensland Government, via Tourism and Events Queensland, is proud to support the Davis Cup by BNP Paribas World Group First Round between Australia and Germany. The tie features on the It’s Live! in Queensland events calendar. Queensland, just the place to experience Australia’s best live events.