Barty wins battle of the Aussies in Sydney

Ashleigh Barty has won the battle of the Aussies and is through to the Sydney final. 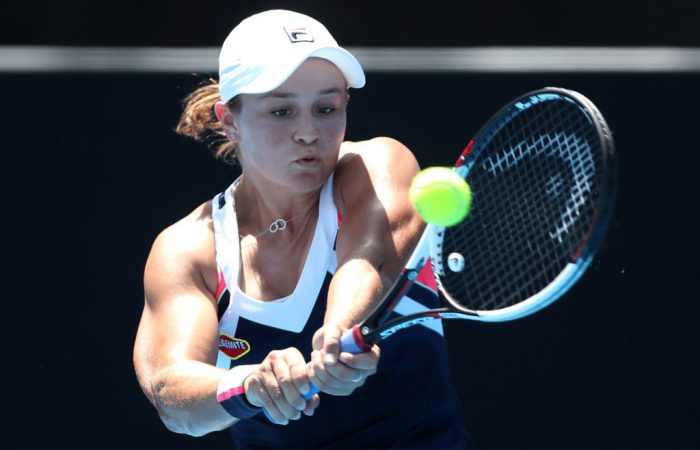 Ashleigh Barty has survived blustery conditions to progress through to her first WTA final on home soil after defeating compatriot Daria Gavrilova in the Sydney International semifinals 3-6 6-4 6-2.

It is Barty’s fourth career WTA final after making three in 2017, winning her first title in Kuala Lumpur last February.

The 21-year-old says that this week is the ideal preparation before the Australian Open begins next week.

“It’s been a pleasure playing here this week and very nice getting a bit of confidence heading into arguably the biggest tournament for us (Australians),” Barty said post match.

“I feel great out on court and very happy to get the win here today.”

The pair began the match in tough conditions, with swirling wind making it difficult for the players to find their groove on serve.

Gavrilova proved the be stronger early on, scrambling and defending for every point before ending the run of broken serves to consolidate and put the pressure on her compatriot.

She continued to press the Barty serve, securing a double break in the seventh game of the set before the Australian No.1 added to the drama by saving set points to claim one of the breaks back.

Barty only won 37 per cent of points on first serve in the opening set, and Russian-born Aussie Gavrilova took full advantage with another return winner to claim the opener.

The Ipswitch native is elated that she managed to progress even with her struggles on serve, where she hit nine double faults and made 59% of first serves.

“I certainly shot myself in the foot with my serve today, maybe I’ll go out to practice and hit another box so it’s alright for tomorrow,” She said.

“The conditions are extremely tough out here. It’s very swirly down at court level.

“I don’t think people actually realise how swirly it can get.”

The second set began as the first finished, with serving proving difficult, but this time 21-year-old Barty consolidated the immediate break.

The Queenslander would break again as Gavrilova’s first serve conversion dipped from 71 per cent to 50 per cent, prompting her to scream, “My percentage is almost at zero.”

Both players began to find some rhythm on serve as the match progressed, sparking some tantalising rallies groove.

At one point Barty halted a rally to challenge a Gavrilova volley when her own lob response was a clean winner. Her challenge was incorrect, leaving both players mystified at what had taken place.

Gavrilova, the Australian No.2, broke before double-faulting on successive points to hand Barty the chance to level the match, which she did with ease.

Barty continued to apply the pressure, winning 73% of points returning Gavrilova’s second serve and converting seven of eight break points. She will meet either Angelique Berber or Camila Giorgi in the final as she looks to become the first Australian since Alicia Molik in 2005 to win the Sydney title.