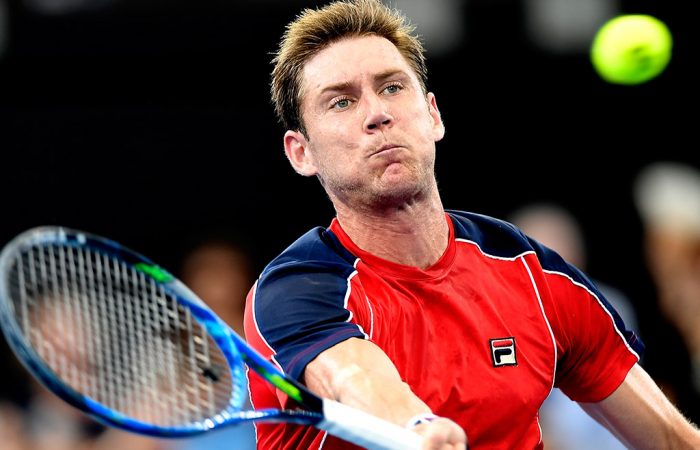 A desire to reach his full potential is driving Matt Ebden’s latest surge, with the resilient all-court player tipping the best is yet to come.

The 30-year-old beat American up-and-comer Frances Tiafoe 6-3 6-2 at the Brisbane International on Monday in a continuation of the form he showed at the back end of 2017 to set up a second-round clash with Nick Kyrgios.

The South African-born Perth product enjoyed many years of consistency either side of the top 100 before injury interrupted.

Now over a knee complaint that set him back in 2016, Ebden says his game is more evolved and that age is not a factor.

“For sure I’m a better player, whether on not that shows in rankings yet is to be seen,” he said.

“Nearing the end of my 20s, you start thinking this isn’t for ever … but I know the level I can play at, you don’t lose that, it’s not a fluke.

“I think I can do a lot better than I’ve done in the past and that’s what motivated me to get back up again.”

Ebden pushed Belgian world No.7 David Goffin in a deciding set tie-breaker loss in Japan last year and will give himself every chance of spoiling Kyrgios’ return from a hip injury when they meet for the first time on either Tuesday or Wednesday.

“Nick’s a good player, just like everyone else,” Ebden said.

“He’s got a great serve, it’s one of his biggest weapons and he’s good around the court.

“I’ve got to serve well myself and come out and play a really high quality level.”

Kyrgios was surprised to learn of the extent of Ebden’s resurgence, but says he has always rated his more senior compatriot.

“He’s always had potential to be a very good player, he’s a great athlete and confidence goes a long way in the sport and if he gets a bit of confidence with his game style he’s tough to beat.”

Thompson, Smith ousted in first round

Australian wildcard Jordan Thompson has been bundled out 6-2 6-4 in the Brisbane International first round by American rising star Jared Donaldson on Monday night.

The Australian Davis Cup player, who made the Brisbane quarterfinals last year, had no answer to 21-year-old Donaldson, bowing out in 90 minutes at Pat Rafter Arena.

World No.54 Donaldson – ranked 40 spots higher than the 23-year-old Thompson – will meet the winner of the first-round clash between Denis Istomin of Uzbekistan and Damir Dzumhur of Bosnia-Herzegovina.

Smith battled impressively before going down to the eighth seed 6-4 7-5.