The form player of the Australian Open Play-off, Alex De Minaur claimed a main-draw wildcard for next year's Australian Open with an impressive victory over top seed Alex Bolt. 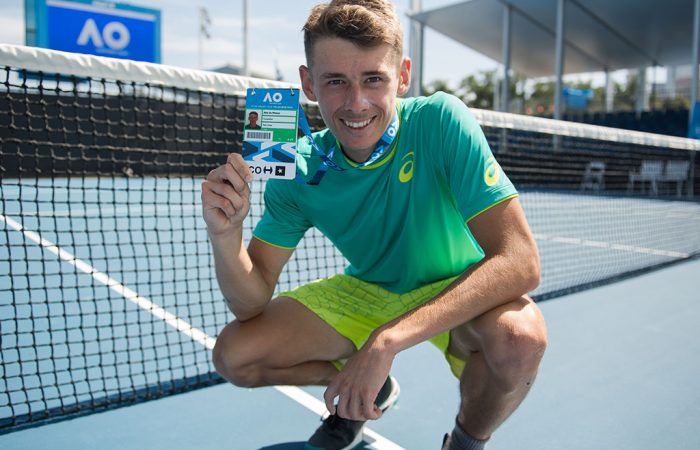 Alex De Minaur will contest the Australian Open for the second straight year after beating Alex Bolt in the final of the AO Play-off on Sunday at Melbourne Park.

Last year, De Minaur received a discretionary wildcard into the field, and performed marvellously with a five-set win in the first round over Gerald Melzer.

“I feel like I thoroughly deserve this one – that’s what happens when you are actually playing for one,” the 18-year-old said.

“I couldn’t be happier with my level and I can’t wait for the Australian summer to come.”

As noted by Bolt in the trophy presentation, De Minaur was the form player of the Play-off week. Thriving in the best-of-five set format, he first swatted aside Harry Bouchier then Matt Barton for the collective loss of just eight games.

Last year’s Play-off winner Omar Jasika proved a trickier foe in the semifinals, but after De Minaur dropped the first set he trounced the left-hander, completing a 3-6 6-1 6-2 6-0 victory.

In the final, Bolt was another left-handed challenge, but De Minaur was up to the task.

He broke serve immediately after a lengthy opening game and that set the tone; he broke again in the seventh game and comfortably served out the opener.

Bolt received courtside treatment for what appeared to be a back injury, and it appeared to help in the second set. Yet he couldn’t stop the youngster from scoring another service break.

The top seed reeled off a succession of winners to hold for 4-5, forcing De Minaur to serve for the set. De Minaur did just that, taking a decisive two-sets-to-love lead.

He had chances to make it a straight-sets victory when he held several break points in the 11th game of the third set – thanks to some stellar returning – but Bolt fought them off and volleyed a backhand winner to get out of trouble.

In the ensuing tiebreak, the South Australian red-lined, belting – in no particular order – three return winners, an ace and a forehand winner to race through it.

“At the end of the day it’s tennis, so if you let those type of things affect you, it’s really gonna hurt you in the long run,” he said.

“I just told myself that Bolty was too good, I still had my chances, (and that) I’ve gotta start really well this fourth set and try to keep the momentum going.”

He did just that; in the blink of an eye it was 4-0, with De Minaur relying on the rock-solid play – highlighted by stellar defence and impenetrable returning – that had served him so well earlier in the match.

Despite more firepower, Bolt couldn’t go with him. Three games later, the teenager had cemented the win.

“I think I’ve still got a lot to get better at. But this week my level was great throughout the whole matches. I didn’t think I dropped my concentration at all,” De Minaur said.

“I’m really looking forward to it (playing Australian Open 2018). I think I’m a better player all round – physically and mentally (compared with 12 months ago).

“So I’m really looking forward to playing against these high-level opponents and seeing where my game’s at. Being able to compete against these guys and give it all I’ve got.”