Canberra Tennis Centre will host the BNP Paribas World Group II first round tie between Australia and Ukraine on 10-11 February 2018. 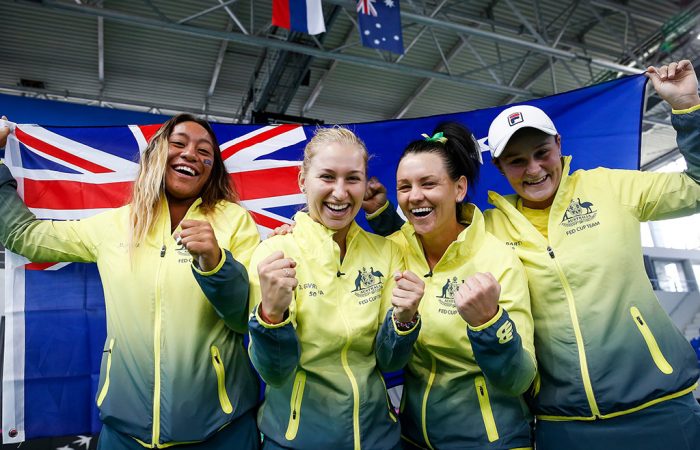 World-class tennis will be showcased in Canberra in February with Australia set to meet the Ukraine in the Fed Cup by BNP Paribas World Group II first round on 10-11 February 2018.

In a coup for the recently redeveloped Canberra Tennis Centre, Australia’s top women will face the Ukraine on a purpose-built grass court in the nation’s capital.

Australian Fed Cup captain Alicia Molik is looking forward to fielding one of the strongest Fed Cup teams in many years, thanks to stellar performances from the top Australian women in 2017.

Led by world No.17 Ashleigh Barty, Australia had three women finish a season ranked inside the world’s top 50 for the first time since 1989.

Along with world No.25 Daria Gavrilova and world No.41 Sam Stosur, Australia also boasts depth in doubles with Casey Dellacqua ranked No.10 and Barty at No.11.

“It’s a fantastic advantage to play a Fed Cup tie on home soil and we hope to see a very loud and patriotic crowd at the Canberra Tennis Centre in February,” Molik said.

“We’ve chosen grass as we believe that will give us the very best chance to win. Ash, Dasha, Sam and Casey are all tremendous players and are keen to do everything they can to get us over the line and into the elite top eight in Fed Cup.

“This is an important tie for both teams to potentially return to the elite World Group and we expect a fierce battle. We played the Ukraine away in February this year and we know just how good they are. Elina Svitolina is ranked No.6 in the world so it will be tough, but we’re excited for the challenge and looking forward to a great tie.”

“We have a fantastic tennis community in Canberra and it is a real coup to secure the Fed Cup tie.  I’ve no doubt the public will come out in droves to support our elite Australian athletes at our world-class facility,” Kachel said.

“Ashleigh Barty is fresh off winning the Newcombe Medal and the current Australian team is one of the strongest we’ve seen in a long time.  They are all brilliant role models for aspiring kids participating in schools and clubs across Canberra.

“We’ve also been delighted to welcome Casey Dellacqua to Canberra for the announcement today. Casey has been a Fed Cup stalwart since debuting with the team in 2006 and she and Ash are a formidable doubles combination. We hope to see her back with the team in February.”

Deputy Chief Minister and Minister for Sport and Recreation Yvette Berry said the ACT Government was proud to bring Australia’s top women to Canberra for this major international event.

“Having such wonderful female athletes in the city has the potential to inspire the next generation. For young girls, the value of such role models cannot be underestimated.”

Australia has played the Ukraine four times, most recently earlier this year, when the team travelled to snowbound Kharkiv in February. Svitolina proved too strong on the indoor hardcourt for the Aussies, winning both her matches, and top 50 player Lesia Tsurenko also posted a win.

The venue announcement caps a busy few months of tennis in the ACT.  Most recently Canberra hosted the Apis Canberra International with emerging men and women from around the world competing for valuable ranking points.

Two-day ticket packages will go on sale via Ticketek on Wednesday 13 December at 9am.