Misaki Doi took another step closer to an Australian Open main draw wildcard with her latest win in Zhuhai, while No.2 seed Zhang Ze had to withdraw from the tournament. 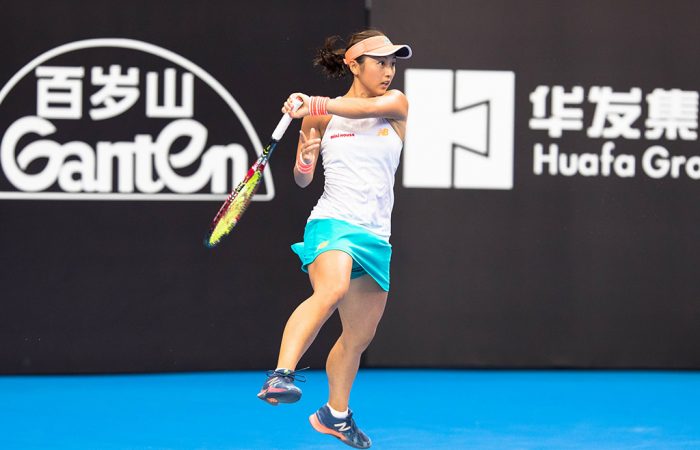 Top seed Misaki Doi of Japan has stormed into semifinals of the Australian Open Asia-Pacific Wildcard Play-off with another straight sets win.

Kai-Chen Chang, last year’s runner-up from Chinese Taipei, grabbed the first break in the sixth game, but lost that lead immediately with a double fault; Doi seized her opportunity and cruised to the opening set.

Chang tried to give her last fight when trailing 0-4 in the second set, but Doi never let her back in, closing out the match 6-3 6-2 with a service winner.

“After she broke my service game, I tried to still focus on my own rhythm, just tried to hit the ball deep and stay aggressive, and then she started to miss some shots, that really helped,” Doi said.

“Physically I feel fine, and I’m looking forward to the semifinal.”

She will now play Lu on Saturday, while Misaki takes on Wang.

“I don’t feel any pressure at all,” 16-year-old Wang spoke on challenging the former No.30 in the world. “I hope I can stay clam and fight.”

On the men’s side, Chinese No.1 Ze Zhang had to pull out of the event on Friday in Zhuhai, sending his quarterfinal opponent Zhizhen Zhang into the final four.

“I couldn’t move my knee after yesterday’s match.” the second seed explained about the withdrawal. “It’s very frustrating.”

Ranked 194th in the world, Ze Zhang will most likely make the cut for qualifying at Melbourne Park in January, where he will then try again for an Australian Open main draw spot.

Soon Woo Kwon, the No.1 seed from South Korea, received a walkover from Indian Vishnu Vardhan; in the semifinals he faces Hiroki Moriya, the Japanese player who edged out countryman Takahashi 3-6 6-3 7-5 after two hours and 14 mins.

In the other semifinal, 21-year-old Zhizhen Zhang will battle against another Chinese player, 31-year-old No.4 seed Zhe Li, who quickly dispatched Jurabek Karimov of Uzbekistan 6-3 6-1.