Ajla Tomljanovic powers into the second round of the Australian Open, while Kimberly Birrell will take positives from her first major since mid-2019. 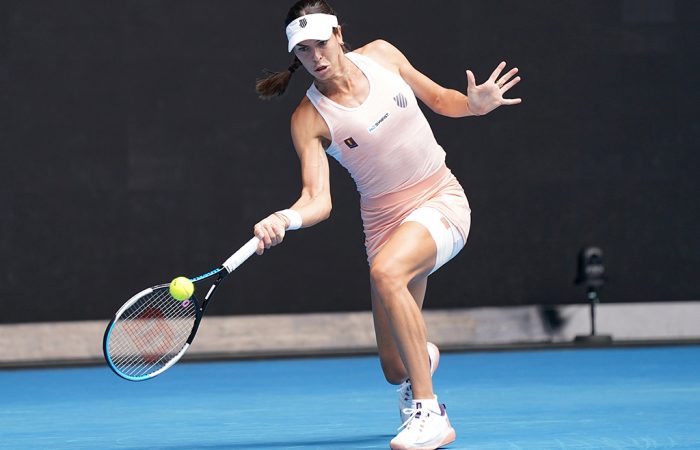 Ajla Tomljanovic has powered into the second round of her home Grand Slam, the Australian defeating Misaki Doi 6-2 6-1 at John Cain Arena.

The only hiccup for the world No.72-ranked Australian, who lost to Doi in their only other encounter, was a service game dropped in the fourth game of the 71-minute match.

Tomljanovic was otherwise in control against her world No.87 opponent, who had lost in the first round of her previous 11 Grand Slam appearances.

While the Australian couldn’t convert on that occasion, she pounced two games later and it was five service games before the Japanese player next held serve.

It was a short-lived reprieve, Tomljanovic winning four straight games to close out the match.

A signature and a smile from @Ajlatom after moving through to the second round🖊️😃🇦🇺#AusOpen #AO2021 pic.twitter.com/uBhdKWi1Wz

Tomljanovic noted the importance of maintaining pressure against the experienced Doi.

“Misaki and I practised quite a bit in the past so we both know each other’s game pretty well but for me it was more about staying engaged throughout the whole match and not letting up, even though I was up,” she said in her on-court interview.

“I know the score-line seems easy but it didn’t feel like it.”

Tomljanovic took confidence from solid practice ahead of the Australian Open, explaining “I think I had a pretty good preparation actually – the facility and everything was really great.”

There was also inspiration in returning to the main draw of her home Grand Slam for a seventh time.

“It’s a little surreal that we’re here after such a long trip and so many unknowns but to get to play in front of you guys again is pretty incredible,” the 27-year-old told fans.

After undergoing two elbow surgeries in recent years, Birrell was contesting only her second tournament since Wimbledon 2019 and the lack of matches showed as Marino claimed the first set 6-0 in 23 minutes.

Birrell’s 30-year-old opponent had also experienced significant time off tour, after stepping away from the game in 2013 and attending college in her native Vancouver, where she competed on the rowing team.

Having earned her way into a first Grand Slam main draw in more than seven years as a qualifier, however, Marino had established some recent momentum. With her big serve delivering three well-timed aces in the opening stanza, her power game was also on song.

While Marino tallied 25 winners in total, the unforced error count grew as Birrell extended the rallies; the Canadian eventually recorded 42 for the match.

Birrell found her best when the odds seemed most against her. Despite rolling her ankle and subsequently receiving medical treatment in the fifth game of the second set, the 22-year-old Queenslander steadfastly stayed in the match.

Serving from behind, Birrell saved four match points – two in the 10th game and two more in the 12th – before forcing the set into a tiebreak.

There, she withstood three more match points and held a set point of her own, before Marino at last claimed the 6-0 7-6(9) win.

Birrell will now turn her attention to the doubles, where she is teamed with Jaimee Fourlis.

Lizette Cabrera will also be richer for the experience, after exiting to Simona Halep, the Australian Open 2018 runner-up.

At world No.2, Halep was not only the highest-ranked player the 140th-ranked Queenslander had faced but also the first top-10 opponent of Cabrera’s career.

While the disparate gap in experience and ranking showed as Halep raced to a 6-2 lead in 28 minutes, Cabrera also produced some impressive winners – especially off her forehand – and challenged in the second set.

Holding a pair of break points in each of Halep’s first two service games of that set, Cabrera eventually converted on her sixth opportunity as Halep served for the match. But with the Australian unable to gain traction on her own serve, Halep eventually emerged with the 6-2 6-1 win after 59 minutes on court .

“When you play for a first time with an opponent it’s always difficult,” said Halep of Cabrera. “I want to congratulate her. I know that she’s still young, so she has the future ahead.”