Seven Chinese players have taken their place in the Asia-Pacific Wildcard Play-off quarterfinals as the battle heats up in Zhuhai for an Australian Open main-draw berth. 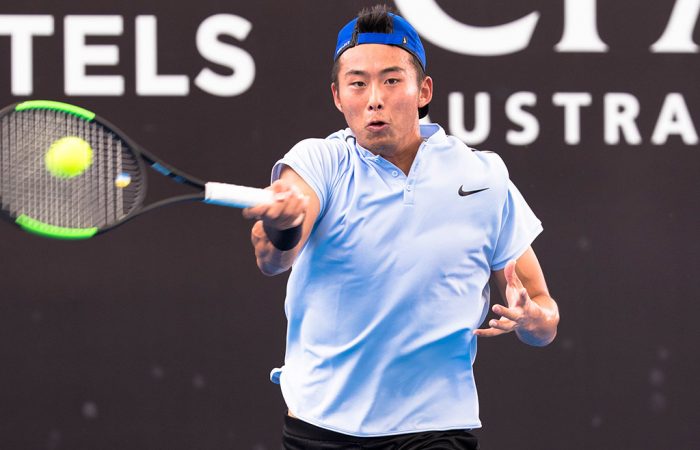 Chinese players shone at the Asia-Pacific Wildcard Play-off on Thursday in Zhuhai, with seven moving into the singles quarterfinals.

Men’s No.2 seed Ze Zhang battled past Wishaya Trongcharoenchaikul; the Thai quickly built an early lead with two breaks in the first 5 games, but Zhang managed to raise his level to strike the ball more efficiently and won the next four games.

After hitting a forehand long, Trongcharoenchaikul was very frustrated to see himself got broken again in the 12th game and lost the set.

A more relaxed Zhang served very well throughout the second set, and closed out the match 7-5 6-4.

“Everyone wants to win it, obviously I will try my best to be the one, but you still need to work every match and every round to be able to do that. Therefore, you have to prepare yourself.”

Zhang was the winner in 2014 when this event was held in Shenzhen, another Chinese city. He then traveled to Melbourne and played local favourite Lleyton Hewitt in the first round, losing that match in four sets.

Next for the current Chinese No.1 will be 21 year-old Zhizhen Zhang, who beat Hao Wu 6-4 6-2 without too much drama.

The younger Zhang, from Shanghai, is considered as the one to watch for Chinese men’s tennis alongside Yibing Wu, who cliched the boys’ singles title at the US Open earlier this year.

Zhizhen Zhang recently produced some high-level tennis when playing at the ATP Shenzhen Open in September; after receiving a qualify wildcard, he went on to be the first tour-level quarterfinalist from China since Ze Zhang in Beijing five years ago.

Last week, in the same Chinese city, he lifted the trophy at the national Grand Prix.

His confidence level is very high right now. “I have my goals, to rise up into Top 300 and then 200 step by step,” he revealed.

“I want to have my opportunity to be able to play a Grand Slam tournament one day.”

In other matches, Chinese No.4 seed Zhe Li advanced to the last eight with a 6-3 6-2 victory over Japanese Yosuke Watanuki. He’ll next play Jurabek Karimov from Uzbekistan, who took out Indian No.6 seed Sumit Nagal 7-5 6-4.

On the women’s side, all four winners were Chinese.

Riko Sawaywanagi had to retire because of injury when trailing No.2 seed Jing-jing Lu 3-5 in the opening set.

Lu will play Xinyu Gao on Friday, and Sun will clash with Wang.