Soon Woo Kwon from South Korea and Misaki Doi of Japan - top seeds in the Asia-Pacific Wildcard Play-off - began their quest for an Australian Open wildcard with wins on Wednesday. 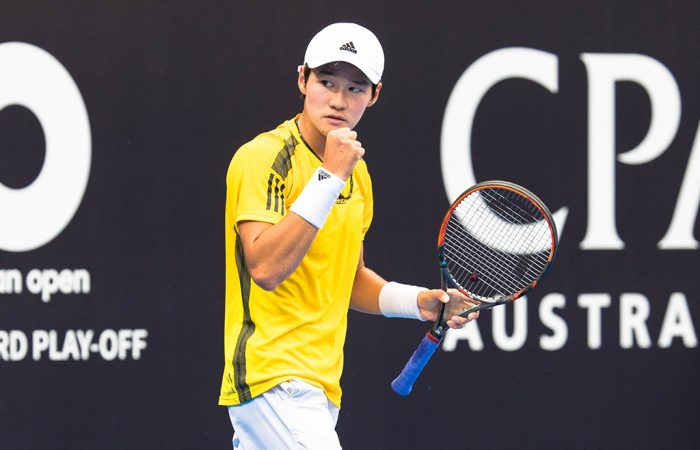 Both men’s and women’s singles No.1 seeds, Soon Woo Kwon from South Korea and Misaki Doi from Japan, began their bid for a 2018 Australian Open wild card with comfortable wins on Wednesday in Zhuhai, China.

Kwon, 19, had a solid season in 2017, playing ATP challengers in Asia mostly and moving his ranking from 308 at the beginning of the year to 168 this week.

Both players served well in the 1st set. Zhao had an opportunity to take a 4-2 lead in the sixth game, but Kwon fired up with three aces to secure his safety; he then earned a crucial break in the 11th game by pushing the left-handed Zhao to hit a backhand at the net, and then served out the set.

Kwon used his experience to build a early lead very soon in the 2nd set, and sealed a 7-5 6-1 victory.

“I don’t think I played really well,” Kwon said after the match. “I felt a little bit tired on the court today, it’s my fifth consecutive tournament, so…

“But I wish I can be the winner on Sunday.”

Kwon will face India’s Vishnu Vardhan for a semifinal spot on Friday. As a 509th-ranked qualifier, Vardhan shockingly eliminated No.3 seed Tsung-Hua Yang from Chinese Taipei.

Two Japanese players, Yusuke Takahashi and Hiroki Moriya, also moved into the quarterfinals, by beating Zihao Xia of China and N.Sriram Balaji of India respectively, 6-1 6-1 and 7-5 6-0.

On women’s side, former No.30 Misaki Doi had to battle through a tiebreak in the second set with her countrywoman Erika Sema. Doi eventually won 6-1 7-6(3) on her first match point, with a passing shot.

“I’m happy to win. At first I felt more relaxed and played well, but in the second set she started to play much better and moved well,” Doi said. “It wasn’t an easy match, but I’m happy I got through.”

Doi had a rough year in 2017, lost in the first round at all four Grand Slams, and her ranking dropped drastically out of the top 100 in October.

“I had the abdominal injury ,and I wasn’t winning a lot matches,” she said, “I hope I can go up again.”

When asked if she’s confident to grab the Australian Open wildcard, she responded with a smile on her face.

At the Australian Open, Doi suffered a painful loss in one of the most talked-about matches in 2016; she held a match point playing Angelique Kerber in the first round leading by one set and 6-5 in the second-set tiebreak.

Yet the German impressively turned the match around, and went on to win the entire championship.

Next for Tere-Apisah will be Miyabi Inoue, who prevailed in an all Japanese fight with 6-3 6-2 over No.7 seed Ayano Shimizu.