We caught up with Sam Stosur when she was in Melbourne this week to discuss her comeback to tennis during the Asian swing as well as her hopes for the Aussie summer of 2018. 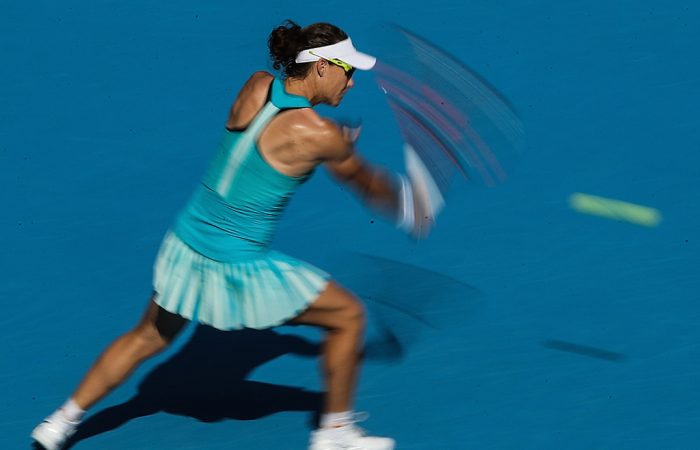 Sam Stosur joined in the festivities earlier this week as it was announced that ANZ Tennis Hot Shots number have hit an all-time high.

And, after hitting with some of the youngsters in attendance, Stosur had a chat with us to discuss the state of Aussie women’s tennis, her own game, her comeback in Asia and her goals for the off-season and Aussie summer of 2018.

You must feel there’s some great role models for the kids here among Aussie women’s tennis specifically at the moment?

“Oh absolutely. Ash (Barty), Dash (Gavrilova), I guess put myself in there, Case (Dellacqua). We’ve had really great success this year overall from the women’s side and we all encourage each other and get behind each other and want to see each other do as best we can, so I think that camaraderie, it makes for a great team atmosphere. And I think that does trickle down to the girls trying to come up. It’d be great if we could see the likes of Lizette (Cabrera) and Pri (Hon) and the girls out there trying to start at the lower level and get there way out onto the tour full time, which would be great.”

Have you had a chance to spend any time with those younger players at all?

“I saw Lizette a little bit actually through Asia, which was great. I was playing after she played Dash, so they had a long three-setter (in Hong Kong) so watched a bit of that … We’re not at all the same events but certainly seeing them out there a lot more which is exactly what you want to see.”

Is there a sense of success breeding success among that group?

“I think it definitely helps. When I was younger I looked up to Alicia (Molik) being at the top of the sport and was fortunate to have a hit with her at the French Open one year I think when I was 15 or 16. That was just incredible. Situations like that, I know what it feels like so to have the higher-ranked players around I think breeds that want to be exactly where they are. I know it did for me.”

How do you assess your comeback during the Asian swing?

“Obviously it would have been nice to have won a few more matches but the first couple of weeks had another couple of challenges along the way as well. But by the end, the match I played against (Agnieszka) Radwanska in Hong Kong was I think just as good as how I was playing through Strasbourg and the French. I was really happy that I got back to that level within a few weeks and obviosuly now you kind of start again, with the time off and the practice and everything else leading into the summer, but the fact I was able to play like that in that last even was really promising and really exciting.”

How were you feeling mentally after such a long time out of the game?

“Felt a little bit refreshed actually. Came home (after Asia) and had a couple of days off and then got straight back into practising and into the gym doing all my fitness stuff. I know I’ve got a long amount of time at the moment – probably the longest pre-season I’ve had ever as well. I feel really keen and eager and refreshed and ready to go.”

Have you had to make any adjustments, or did you work on anything different, during your time away?

“Tennis wise I didn’t actually practice a lot. I probably only had 10 days to two weeks practising properly before I even went to Asia. But there’s always things you can work on and I think every match is an opportunity to see, OK, this was really good, this could be better, what can I do now? And I think Josh (Eagle) and I have really highlighted what we want to focus on and work on throughout the pre-season together. And hopefully plug all the little holes and make my strengths even better, hopefully.”

Having a few wins in Asia must’ve given you some confidence coming into the summer?

“It’s always nice to win matches no matter where or when they come. Then the summer’s a different ball game; starting from scratch, everybody’s kind of in the same position. So if I can try and have a good start, which sometimes hasn’t happened for me, then that’d be good.”

Lots of players talk about a silver lining or a benefit to having time out. Did you feel that at all?

“I felt like I really wanted to be out the competing in that last part of the year. For some players who have had a long year it’s sometimes hard to feel like that all the time, so that’s one thing. But I think just the fact I was home I actually had a bit of normal life, I guess. You could make plans and say, OK, I will go out for dinner on Saturday night because I’m gonna be here. And it was kind of a little bit strange. But I got a taste for what it would be like maybe one day when I do retire and I was able to do some other things, spoke to some other people and kind of learned about other stuff. I think it was just a really nice opportunity to be home and catch up with all these people who I never really see, which is a bonus, and enjoy it while I had it.”

Was there anything you missed in your time away?

“Actually the competing. I actually realised … well I knew that anyway, but I think sometimes when you don’t have it (competition) it’s highlighted that I do like competing and I do like being out there, I do like feeling that pressure. And that’s what you play for. You can practice and do everything up in the gym and all the hours on court, but it’s for nothing if you don’t go out and compete. And that really became evident to me because I could do all the running, all the gym, all the stuff that I wanted, but it doesn’t mean anything unless you’re using it for something.”