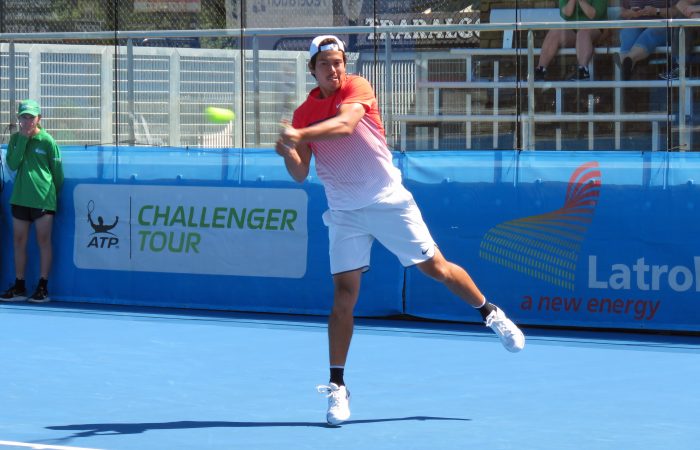 Jason Kubler has become the lowest ranked player to win an ATP Challenger Tour title this year after clinching an epic Traralgon final in a deciding set tiebreak over Alex Bolt on Sunday.

“A bit of hard work and a bit of luck went my way,” Kubler said. “I’m just so happy I got the win. I’m over the moon at the moment.”

The world No.615 will see his ranking nearly halve to be inside the world’s top 350 after the victory, in which he staved off a match point against the Bolt serve in the second set. He also becomes the ninth qualifier to win an ATP Challenger Tour title this year.

The unseeded South Australian made the early running in the final, sweeping past Kubler to take the first set in a hurry, but the in-form Queenslander – a recent finalist in Toowoomba and Cairns on the Australian Pro Tour – fought back strongly to even the match. Bolt was not swayed and opened the final set with a break of serve, but the resilient Kubler stayed the course, breaking back and then going on to create three match point opportunities of his own (snuffed out with ease by the big-serving Bolt) before the match drew to its thrilling conclusion.

Kubler edged away to what would be a winning advantage midway through the deciding tiebreaker and eventually took the title 2-6 7-6(6) 7-6(3).

“It was a 50/50 match and it’s a shame there had to be a winner and a loser because we both played well. Literally, a couple of shots decided it.”

For the 24-year-old, the win marks his first at ATP Challenger level since his maiden title in Sibiu, Romania, in 2014. Kubler was also a finalist in Lima, Peru, that same year.

On a personal note, playing in Traralgon this week meant a return to the place where he first injured his troublesome knees a decade ago, and as such, the title win marked a particularly significant milestone for Kubler.

“I feel like it’s been full circle for me, coming to Traralgon where I first did my knee when I was 14,” he said. “It was actually a big step for me personally this week just getting over that.”

“I feel like I can play on hardcourts now. I’ve played eight matches here and my knees are good. I’m getting more and more confidence each time I play.”

In better news for Bolt, he and partner Bradley Mousley, the No.3 seeds, took the Latrobe City Traralgon Challenger doubles title on Saturday with a 6-4 6-2 win over Americans Evan King and Nathan Pasha.