Barty and Dellacqua: how a perfect partnership began

A fortuitous wildcard, some brainstorming with Nicole Pratt and Jason Stoltenberg, and a text message paved the way for Ash Barty and Casey Dellacqua to link up - and become one of the best doubles teams in the world. 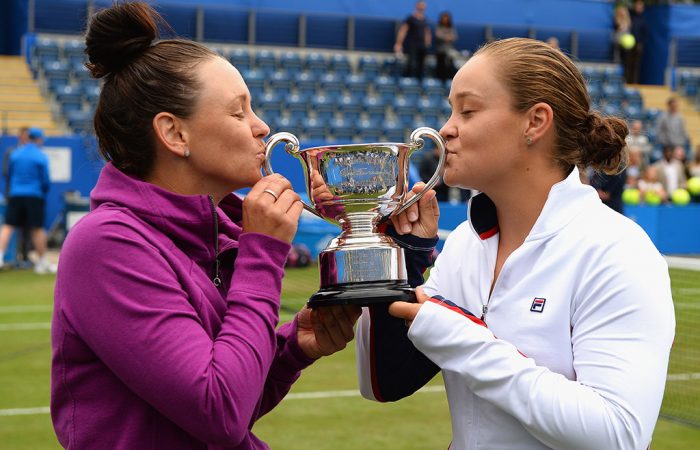 Ash Barty and Casey Dellacqua were in very different places in their respective careers when they played their first doubles tournament together.

It was at the Brisbane International in 2012, when Barty was a 15-year-old rising star with a junior Wimbledon title recently to her name, while Dellacqua was an established pro who’d already cracked the top 40 in singles and won a major doubles title.

Barty, thanks to her Wimbledon success and her profile as one of Australian tennis’s most exciting rising stars, had been guaranteed a wildcard in Brisbane.

So how would she use it?

“I was chatting to Pratty (Nicole Pratt) and Stolts (coach Jason Stoltenberg) at the time and said, ‘should we play some doubles?’ And Pratty said, ‘yeah, play with Case,'” Barty recalled.

Dellacqua didn’t have a regular partner at the time, so Barty sent her a text, asking if she’d be interested in pairing up.

“You were set for the rest of the summer and obviously we were on different schedules,” Barty reminded Dellacqua during a joint interview with tennis.com.au. “So it was just literally a text message – do you wanna play? I’ve got a wildcard.

“I remember at the French (Open) in 2011, just before junior Wimbledon, you won with Scott Lipsky. And I remember saying to Pratty that I liked the way that Casey played, on the doubles court and obviously singles as well.

“I thought probably it would be a good match-up with the personality, more so than the tennis, to start off with.”

What a decision that turned out to be.

The Aussie duo drew top seeds Natalie Grandin and Vladimira Uhlirova in the first round at Brisbane in 2012 – and knocked them off in a match tiebreak. They would go on to reach the semifinals before being stopped by Raquel Kops-Jones and Abigail Spears.

Indeed, in just their third tournament together, they advanced to the Australian Open 2013 final. They would also go on to reach the Wimbledon and US Open finals and win the WTA title in Birmingham – all while Barty was barely 17 years of age.

When they reunited full time in 2017 following Barty’s break from the game, they reached the Roland Garros final, becoming the first Australian team in the Open Era to reach the final of all four Grand Slam events.

Three more WTA titles this season have taken their career tally to five.

Such stellar form was rewarded through their qualification at the elite eight-team WTA Finals in Singapore, the first time either Barty or Dellacqua have featured at the season-ended championship.

They play their first-round match against Kiki Bertens and Johanna Larsson on Friday night.