Barty, Dellacqua have Singapore in their sights

Ash Barty and Casey Dellacqua continued their quest for a place at Singapore's WTA Finals in October with a first-round win on Tuesday in Cincinnati. 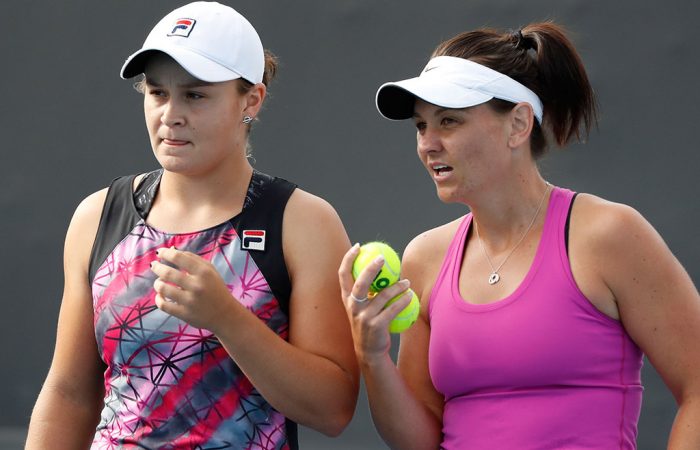 Ash Barty and Casey Dellacqua are in prime position to qualify for the WTA Finals in Singapore.

The Aussie doubles duo are currently in fourth place in the Race to Singapore standings and are hopeful of claiming one of the eight berths at the prestigious season-ending championships.

With 3627 points, Barty and Dellacqua are well clear of the ninth-placed Andrea Hlavackova and Timea Babos, who have accrued 1897 and are currently one place outside the qualifying cut-off.

Barty and Dellacqua will look to shore up their position with a strong run this week in Cincinnati; they kicked off their campaign with a 6-4 6-2 win on Tuesday over Americans Alexa Glatch and Catherine McNally.

Daria Gavrilova and Daria Kasatkina await in round two.

“At the beginning of the year, we started in Brisbane and with a quarterfinal at the Aussie (Open) but I think we’ve certainly probably exceeded what we thought was possible by this time of the year already, so the Champs (WTA Finals) is a big goal for us,” Dellacqua told tennis.com.au.

“We’d love to go – neither of us have been before. And I think we certainly are in the top crop of good doubles teams so I think … if we keep putting in performances and keep giving ourselves opportunities like we have these last couple of months, then (qualifying for) the Champs would take care of itself.”

This season Barty and Dellacqua have already won WTA titles in Kuala Lumpur, Strasbourg and Eastbourne – tournaments played on three different surfaces – as well as reaching the final at Roland Garros.

Quarterfinals at Melbourne Park and Wimbledon plus a runner-up finish in Eastbourne have helped them build a win-loss record of 27-8 and bolstered their doubles rankings to No.14 (Dellacqua) and No.16 (Barty).

Two teams – Ekaterina Makarova and Elena Vesnina, and Martina Hingis and Yung-Jan Chan – have already qualified for the 2017 Finals.

Barty and Dellacqua actually came close to qualifying for the WTA Finals – then staged in Istanbul – back in 2013, a season during which they reached the Australian, Wimbledon and US finals when Barty was just 17 years of age.

Unfortunately for them, the WTA Finals field then only featured four doubles teams; they finished that season fifth in the race.

“We should have made it (in 2013) but (Ash) was on a restricted schedule (due to her age) so we couldn’t play enough and they only took four teams then as well,” Dellacqua said.

Added Barty: “Then the year after they changed it to eight teams (laughter).”

In 2015, when Barty had stepped away from the sport, Dellacqua enjoyed an extremely successful partnership with Kazakhstan’s Yaroslava Shvedova, reaching the French and US Open finals and ranking among the top eight teams for Singapore.

Yet just a few weeks before the Finals, at the China Open, Dellacqua fell over when competing and hit her head on the court; she sustained a severe concussion which forced her and Shvedova to withdraw from Singapore and which led to a string of health problems that kept her off court for the better part of a year.

“You were robbed,” Barty pointed out to Dellacqua when chatting with tennis.com.au.

“I guess a little bit,” Dellacqua laughed. “I feel a bit cheated. Obviously with Slava (Shvedova in 2015), I was pumped, I was so excited, it was the first Champs I made, and was a bit robbed, didn’t get to go.

“(This year) would just be a really nice reward for what I feel like is the effort that Ash and I put in every week, so we deserve that opportunity. We are one of the best doubles combinations in the world, and to do it with Ash would probably be a highlight of my career.

“I’m obviously getting older, and to finish the year by playing something like that with Ash – and this year for me has been extremely special to be back out playing with Ash anyway – it’s a really nice position where we’re at.”