Ash Barty and Casey Dellacqua, playing for the first time at the prestigious WTA Finals in Singapore, have drawn Kiki Bertens and Johanna Larsson first up. 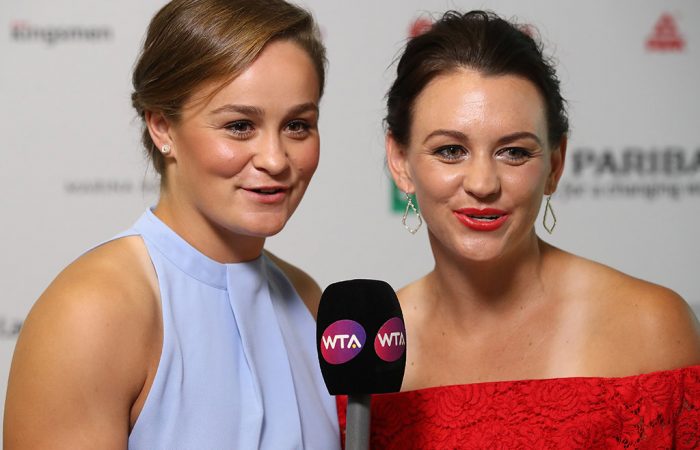 Ash Barty and Casey Dellacqua will play Johanna Larsson of Sweden and Kiki Bertens from the Netherlands – the last team to qualify – in their first match at the WTA Finals.

The Australian duo are the fourth seeds in the event, which unlike the round-robin singles tournament, is contested using an eight-team elimination format.

Barty and Dellacqua are one of the world’s best teams, but they are also two great comeback stories.

Dellacqua had suffered a terrible fall at the China Open in 2015 which left her with severe concussion, and she struggled to even get through day-to-day life with her family.

She endured severe headaches and neck pain, and spent time seeing a sports psychologist to overcome the mental demons involved with such an injury.

And Barty has enjoyed a breakout 2017, starting the year ranked No.271 and ending it inside the world’s top 20 – and with a berth at next week’s WTA Elite Trophy in Zhuhai to boot.

Most of their resurgence can be traced to late 2016, when Dellacqua got back on the court and chose to partner with her Fed Cup teammate.

She says the thought of playing with Barty – who had only just returned to the tour herself after time off playing cricket in the women’s Big Bash League – was a big inspiration for her.

And it has paid off, with the two qualifying for the elite end-of-season championship.

“The thought of Ash coming back, that was quite exciting for me.

“It was clearly a tough time for me after the concussion but it’s all in the past now. I’m really glad that I got through that, and to have the year that we’ve had with Ash has really been exceptional I think, from where we both have come from.”

She says they had no expectations when they first teamed up.

“We started out the year at the Aussie Open not really too sure what to expect but we’re here in Singapore and we’ve definitely been one of the better teams this year.”

Their best result at a Grand Slam was when they made the French Open final, where they fell to top seeds Bethanie Mattek-Sands and Lucie Safarova.

That was one of six WTA finals in 2017 for the Aussies, who won titles in Kuala Lumpur (hard), Strasbourg (clay) and Birmingham (grass) and finished runner-up in Eastbourne and New Haven.