Sam Groth, Akira Santillan and Matthew Ebden are into the second round of the ATP World Tour tournament. 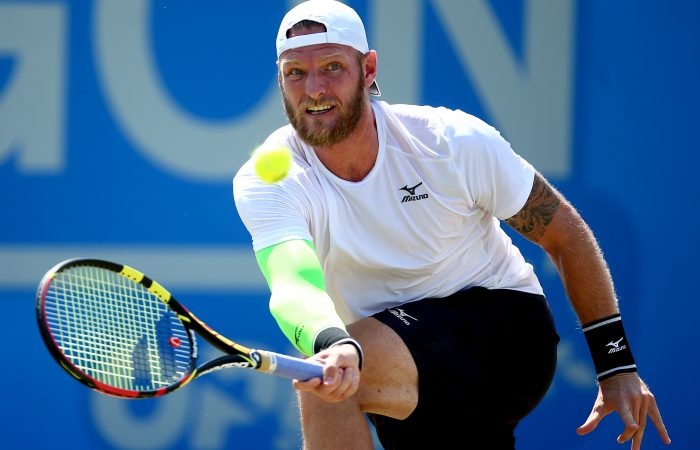 Three Australians have advanced to the second round of the ATP World Tour grass event in Newport.

The 29-year-old qualifier, who is ranked No.201, served 23 aces to record his first ATP main draw win since the Brisbane International in January.

Groth next plays the tournament’s top seed and fellow big server John Isner. They have played twice in Davis Cup ties in the past two years, with Isner winning in straight sets on both occasions.

Joining Groth in the second round of the Hall of Fame Tennis Championships is 20-year-old rising star Akira Santillan and former world No.61 Matthew Ebden.

The world No.171, who is now on a six-match winning streak after winning an ATP Challenger title in Winnetka last week, faces American Bjorn Fratangelo in the second round.

Ebden continued his momentum from qualifying, scoring a 6-1 6-4 win over American wildcard Rajeev Ram, a two-time champion at the tournament.

The 29-year-old meets sixth-seeded Slovakian Lukas Lacko in the second round.

Groth teamed up with Indian veteran Leander Paes later in the day to score a first round doubles win. All-Australian duo Alex Bolt and Andrew Whittington are also into the quarterfinals.

Italian Alessandro Giannessi scored a 6-7(3) 6-3 6-4 victory over the 20-year-old Polmans in a near three-hour battle.