Aiava begins strongly in 18/u event

Destanee Aiava, the No.1 seed in the girls' Australian 18/u championships, kicked off her December Showdown campaign on the best possible note. 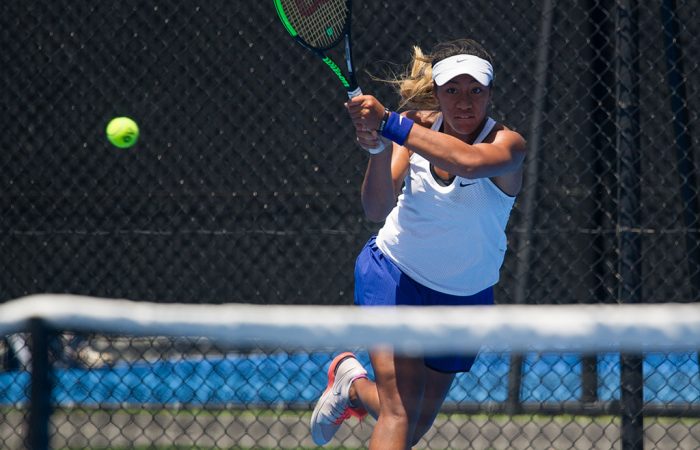 Destanee Aiava lived up to her No.1 seeding on Monday at Melbourne Park.

The Victorian trounced Jeanette Lin 6-2 6-0 in her first match at the 18/u Australian Championships, one of several events making up this year’s December Showdown.

Aiava, 16, vaulted to the top of her round-robin group with the victory, and will face seventh seed Michaela Haet and Selina Turulja in her next two matches.

The top two placed players from the four round-robin groups will advance to the knockout quarterfinals.

There’s plenty of incentive for Aiava to perform well at Melbourne Park this week – the winner of the 18/u girls’ event will receive a main draw wildcard at Australian Open 2017.

But she’s contending with tough competition in the 16-player field.

There’s second seed Jaimee Fourlis, who earlier this year won her first professional title on the Australian Pro Tour and who on Monday beat Alexandra Bozovic 6-2 6-2.

There’s No.3 seed Sara Tomic, who swept past Lisa Mays for the loss of just four games in her first round-robin match.

And there’s also Priscilla Hon and Maddison Inglis, who are the two seeded players in Group D; Hon is the defending champion at this event while Inglis won last year’s Australian Open wildcard play-off.

Seeded fourth and fifth respectively, both won in straight sets on Monday.

In the 18/u boys’ tournament, top seed Alexei Popyrin also started strongly with a 7-6(3) 6-2 win over qualifier Connor Di Marco.

In the 14/u Australian events, the boys’ and girls’ quarterfinal line-ups have been completed.

Leading the way in the boys’ event – after top seed Liam Franklin was upset in the second round – is No.2 seed Kamil Adam Kozlowski, who reached the quarterfinals after defeating 13th seed Cooper White 6-2 2-6 6-2.

Top two seeds Olivia Gadecki and Annerly Poulos remain on track for a finals clash after both won their third-round matches at Melbourne Park on Monday.

Gadecki – who is yet to drop a set so far – advanced to the quarters with a 6-3 6-4 win over Natasha Lystrup Camer-Pesci while Poulos sealed her place in the last eight with a three-set win over wildcard Isabelle Papazyan.