Top two seeds Denis Istomin and Duckhee Lee will clash in the AO Asia-Pacific Wildcard Play-off final, while Luksika Kumkhum and Kai-Chen Chang will battle for the women's wildcard. 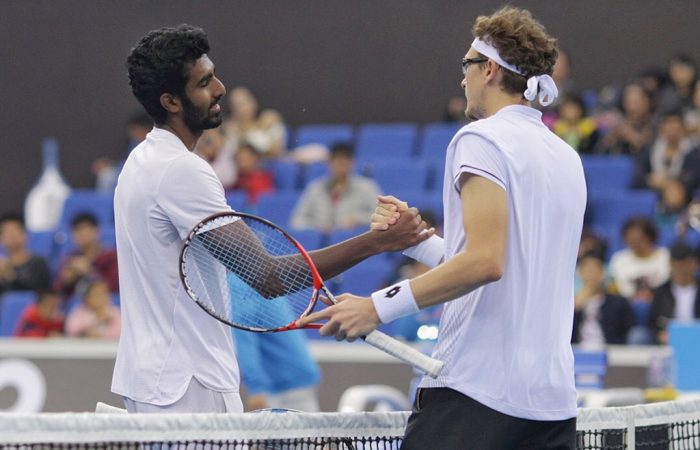 After Istomin and Gunneswaran split in the first two sets, the third was very dramatic.

The Uzbek saved four match points – three with powerful forehand winners – in the 10th game, when Gunneswaran was serving for a place in the final.

Both players didn’t realise initially they had to play the advantage set; when Istomin won his first point serving at 6-6, the chair umpire had to remind them they were not playing a tiebreak.

Gunneswaran also faced three match points when serving at 0-40 down in the 14th game, but impressively hit his way out of trouble.

Eventually, the more experienced Istomin won the gruelling battle when Gunneswaran committed a fatal double fault; it sealed a 6-2 1-6 11-9 victory.

“I was just trying to hold my serve first, and then trying to find the chance to break him.” Istomin said.

“I don’t think about the match points, either when they were my opponent’s or mine. I just tried to play every point and tried to win.

“I’ve never played Duckhee Lee before, but I’m sure it’s going to be a very difficult match. I need to make him do mistakes, and I need to serve well, like I did today in the last couple of games.”

Yet Wu served better to keep himself alive in the second; he fired a return winner to break Lee for the first time in the 12th game, sending the match into a third set.

Lee broke early in the deciding set to lead 3-1, only for Wu to level it up. Yet a crucial unforced error from Wu saw Lee break serve in the 11th game, and he served out the match with a love game.

“It’s a really tough match, I feel a little bit tired, but I tried my best to play every point in the match, and that’s why I think I can win today,” Lee said.

“I know (Istomin) is a very good player, and I respect him a lot. Tomorrow’s final is my last match of the season, I will give my all and try to win.”

Second seed Kai-Chen Chang of Chinese Taipei cruised into the Play-off final in Zhuhai after beating Xiaodi You 6-4 6-1.

Both players couldn’t hold their serves in the first four games until Chang – the 2014 wildcard winner – made some rhythm changes with speed and placement when serving.

It worked perfectly, helping her to build a 5-2 lead before winning the first set 6-4.

An impatient You was error-prone in the second set, allowing Chang to quickly wrap up the match in straight sets.

“After starting to hold my serves, it gave me a lot of confidence to play more freely, and that’s why in the second set I was able to take the control,” Chang assessed.

“I won’t give myself any pressure tomorrow, because I feel like I’ve already done a good job and made into the final in this event for a second time. Just try my best, then we’ll see.”