China's Wu Di battled from a set down to advance to the semifinals of the AO Asia-Pacific Wildcard Play-off in Zhuhai, while women's top seed Hsieh Su-Wei is out. 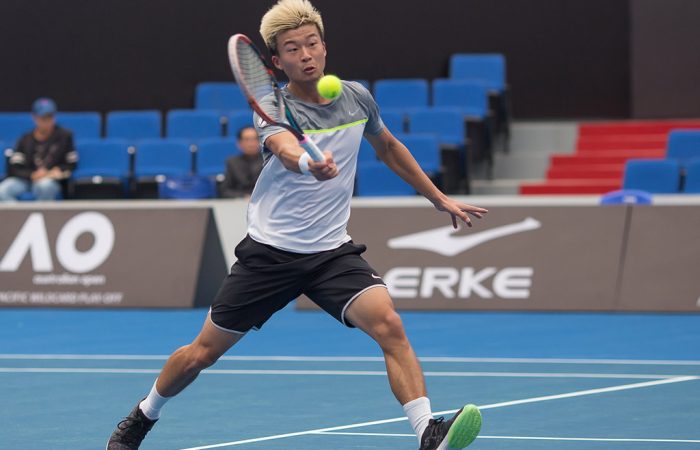 Having never faced his 559th-ranked opponent before, Wu was broken early on his way to losing the first set.

Prashanth had opportunities in the second set, but couldn’t convert the multiple break points in the third game. Wu started to serve better and broke serve for the first time in the sixth game, and soon the match was headed to a deciding set.

Three games later, he closed out the match with an ace down the T.

“I was a little bit surprised how well and aggressive he played in the first set. I didn’t have any chance to get into the match at all,” Wu reflected.

“But getting used to his play style after the first set, I noticed his backhand was not as strong as the forehand, so I changed the tactic and it worked well for me.”

In the semis, Wu will tackle Duckhee Lee after the second seed from South Korea needed three sets to subdue Ruben Gonzales from the Philippines.

“The matches we played were never easy,” Wu said of Lee, who competes while suffering deafness.

“He is indeed very talented … what he has been doing is very encouraging, because he needs to put a lot more effort than other people to be where he is now.”

The more experienced Istomin scored two breaks in the opening set against the 19-year-old, and despite a small slip at 5-0 in the second set, went on to close out a 6-2 6-2 victory.

In the semis he faces Prajnesh Gunneswaran from India, who beat Francis Casey Alcantara from the Philippines 6-4 6-1.

“I was in control most of the time, so I’m happy that I won,” Istomin said.

“I saw him (Gunneswaran) play last week in Astana. He’s a dangerous player, lefty, so it’s gonna be a tough match for sure.

“(Holding this event) is a really good move from Tennis Australia to help the Asian players, especially the young ones to get a chance to play with the big names in the Australian Open. When this event was held in Tashkent before, I was the champion winning the wildcard in 2005, and the next year I played my first Australian Open with Roger Federer in the 1st round (he lost in straight sets).

“But with the experience to have the opportunity to play Roger on such a big occasion, I think it helps me to improve and become a Top 50 player a few years later.

“In my opinion, the other slams should consider to do the same thing to help the development of tennis throughout Asia.”

Unfortunately for women’s top seed Hsieh Su-Wei, a lingering ankle injury got the better of her.

Hsieh withdrew before the match, sending Japan’s Junri Namigata into the semifinal.

“I twisted my right ankle when playing in an ITF tournament in Toyko last month, I still feel the pain quite a bit, so I had to make the decision to take care of my body,” Hsieh said.

Hsieh also lost in the women’s doubles second round with her little sister Shu-Ying Hsieh on Thursday; they fell to Thai combo Peangtarn Plipuech and Varatchaya Wongteanchai.