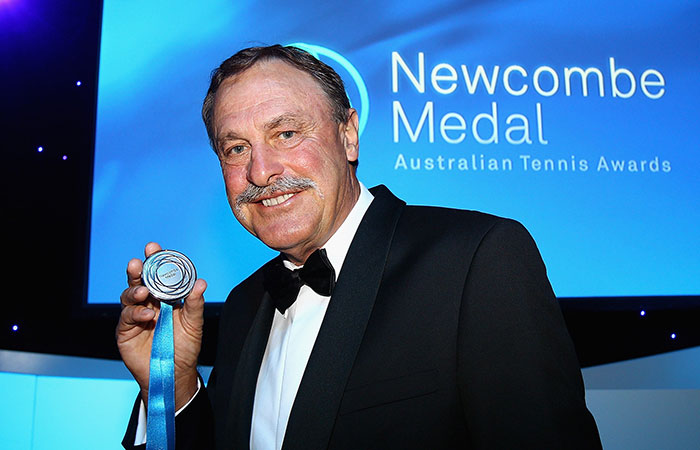 The highest individual honour in Australian tennis will be awarded to the most outstanding elite tennis player and ambassador for the sport at a special awards ceremony to be held in Melbourne next Monday.

“Along with honouring our most outstanding professional players, these awards celebrate and recognise the exceptional accomplishments of tennis communities, coaches, clubs and schools around the country,” he said.

The 2016 finalists were honoured to learn of their nomination for the sport’s top gong.

Alcott said: “It’s a massive honour to be nominate for the Newk for a second year running. Tennis Australia has always been a huge supporter of me and everything that I do, so to have their backing and to be nominated for their highest honour means a lot to me.”

Gavrilova said: “This year has been just incredible for me. Winning the Hopman Cup with Nick, getting to represent Australia in Fed Cup and at the Olympics and now this, a nomination for the Newcombe Medal. I’m so proud and grateful.  It’s a real privilege and I’m looking forward to being there on the night.”

Millman said: “It’s a great honour to be nominated alongside some of Australia’s best players. I’m grateful to the team around me as they are a big reason for my success this year.”

Peers said: “Finding out that I have been nominated for the Newcombe is a massive honour. I feel like I’ve had a really solid year. Olympics and Davis Cup were big highlights and to win a few big events in the last month has been great. I’m looking forward to attending the Newks  for the first time. All the other players tell me what a great night it is and I can’t wait to experience it.”

Stosur said: “It’s always an honour to be nominated for the Newk. I have really good memories of winning the award in the first three years, and to be recognised as the most outstanding player of the year.  I’ve had a pretty good year – making the final four at Roland Garros was a highlight, and I was really proud to go to Rio and represent Australia in my fourth Olympics.”

Thompson said: “John Newcombe is not only a legend of Australian tennis but of Australian sport. It is a huge honour to be nominated for such a prestigious award. I understand Australian tennis is on the move and a lot of players are making big advances in the rankings. I’m up against some stiff competition for this award and I wish everyone the best of luck.”

The seventh edition of the Newcombe Medal, Australian Tennis Awards will take place at Crown Palladium in Melbourne on Monday 28 November 2016.

Dylan Alcott (Vic) began 2016 with wins in Brisbane and Sydney before successfully defending his Australian Open crown in Melbourne. The world No.1 joined Heath Davidson to win the World Team Cup in Tokyo before winning two gold medals, in singles and doubles, in Rio. Other titles include South Africa Open, Japan Open, Open de France and British Open.

Daria Gavrilova (Vic) reached a career high ranking of No.24, posting wins over world No.1 Angelique Kerber, Petra Kvitova and Simona Halep. Highlights include her first WTA singles final and second doubles final in Moscow, fourth round at the Australian Open, representing Australia for the first time in Fed Cup and the Olympics and winning the Hopman Cup.

John Millman (Qld) reached a career high ranking of No.60 and made third round appearances at the Australian Open and Wimbledon. He defeated world No.15 Richard Gasquet, the biggest win of his career, to reach his first ATP semifinal at Winston-Salem. He made his Olympic debut in Rio, becoming the first man to win 6-0 6-0 in men’s singles at an Olympic Games.

John Peers (Vic) finished the year as ATP World Tour Finals champion, won the prestigious Paris Masters and titles in Hamburg, Munich and his second Brisbane International, all with new partner Henri Kontinen. Other highlights for 2016 include representing Australia in his Davis Cup debut and playing both mixed and men’s doubles at the Olympic Games in Rio.

Sam Stosur (Qld) reached the semifinals of Roland Garros for the fourth time, claimed the record for most number of years representing Australia in  Fed Cup and played her fourth Olympic games. Sam reached the final in Prague and semifinal in Madrid, qualifying for the WTA Elite Trophy event in Zhuhai.

Jordan Thompson (NSW) broke into the world top 100 for the first time in May and achieved a career high ranking of No.81 in November. He captured his first ATP Challenger Tour title at Cherbourg, followed by wins at Anning, Ho Chi Minh and Traralgon. Also won four doubles titles,  Launceston, Shenzhen, Lexington and Canberra.

Junior Athlete of the Year – Female

Junior Athlete of the Year – Male

Most Outstanding Club presented by Medibank