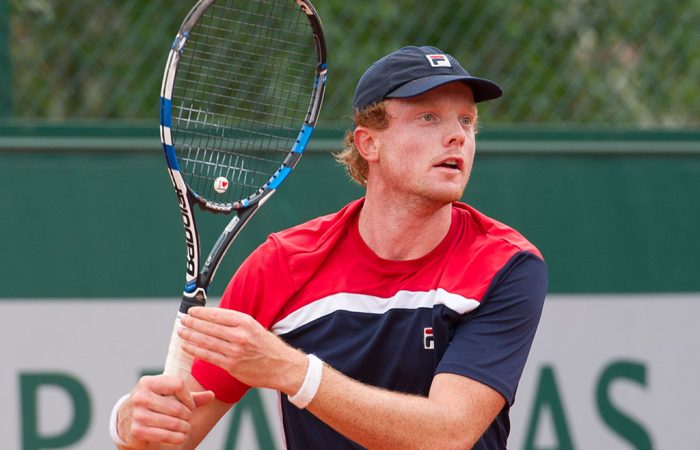 A gritty victory has sent Matthew Barton through to the second round of Wimbledon qualifying.

In his best performance to date at the grasscourt Grand Slam, the New South Welshman recovered from 2-5 in the third set to post a 6-7(0) 6-4 8-6 win over Argentina’s Marco Trungelliti.

Saville has qualified the past two years for the Wimbledon main draw and will aim to continue his campaign for a third year running when he faces Bosnia’s Aldin Setkic in round two at Roehampton.

Barton looked on track for a comfortable win when he built a 1-4, 0-40 lead over Trungelliti in the opening set.

Yet despite being “pretty heartbroken” to drop the opener, he steadied in the second set and played good tennis in the third, despite being just a game from defeat.

Barton suffered a nasty fall on the last point of the 11th game of the third set – a point won by Trungelliti, which pushed him ahead 6-5 – but managed to re-focus and close out an impressive victory, watched on by Lleyton Hewitt.

“I just tried to stay focused, stay in the zone. Because I was playing well – the third set I played great. I was a bit unlucky not to break him early in the third, and then I got broken … I was pretty happy I was able to get away with it,” he said.

“I slipped a couple of times really deep in the court; the court was a little slippery in the back. That (time in the 11th game) was the third time I’d done it – exact same spot and exact same slip. I was just unlucky because I was hustling for the ball, trying my hardest … The third time I did it I thought: that doesn’t feel too good. I just got up and tried to walk it off and play, because I thought if I took off my shoe, it’d get cold and I’d be stuffed.

In six previous appearances in a Grand Slam qualifying draw, Barton had gone beyond the first round just twice.

Yet one of those second-round appearances of those came just a few weeks ago at Roland Garros, where he brushed aside Ramkumar Ramanathan and then pushed former top 10 player Radek Stepanek to 7-5 in the third set in his second-round match.

It was the continuation of an impressive eight-month stretch for the 24-year-old; since October last year he has improved his ranking almost 100 places (he currently sits at No.247) and in 2016 scored main-draw wins at ATP events in Auckland and Houston.

“It gives me confidence, especially the win in Auckland because it was my first ATP win and that’s the one I really wanted, and to get that in three sets it gave me a lot of confidence just in my ability and my all-round game and that kind of set me up for the year so far,” he said.

“I was unlucky in the French against Radek, up a break twice in the third and I thought I was the better player but that wasn’t to be.

“Hopefully I can make amends here and keep playing well because I’m playing good tennis at the moment. I’ve got a big serve, big forehand so it’s very effective on the grass.”

In other Australian results, John-Patrick Smith and James Duckworth went down in tough three-set matches.

Duckworth did well to recover and force his match into a third set, yet ultimately fell to powerful Frenchman Kenny De Schepper 6-1 6-7(5) 6-3.