The Asia-Pacific Tennis League Playoffs have commenced at the Australian Open, with familiar names and up-and-comers joining in the Fast 4 Tennis action. 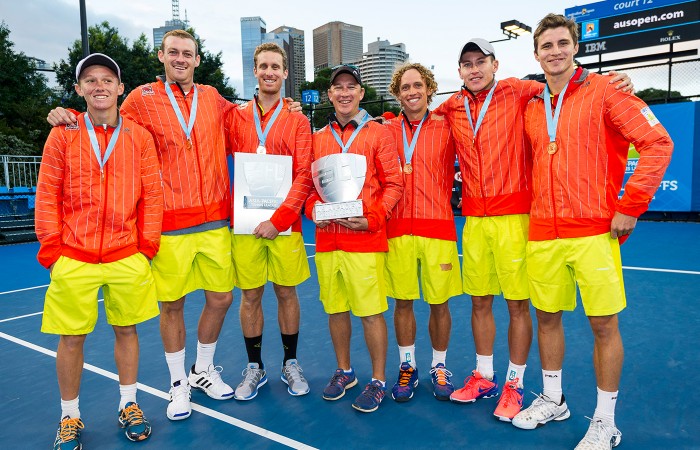 With conferences completed; wild cards submitted; seedings set and the draw announced, everyone is eagerly anticipating the commencement of the 2016 Asia-Pacific Tennis League (ATL) Playoffs.

The Playoffs bring together eight Men’s and eight Women’s teams from the Asia-Pacific region. A mix of winning teams from Australian ATL conferences will pit themselves against their Asia-Pacific counterparts over two days.

The pinnacle of domestic team based tennis, the ATL Playoffs sees teams vying for a total prizemoney pool of $150,000 with a winner’s cheque of $30,000 and bragging rights across the Asia-Pacific. A trailblazing competition showcasing the new FAST4 format, fans will be in for some scintillating tennis.

On the men’s side the Tennis Brisbane Chargers head into the Playoffs as defending champions and top seed.   The Chargers possess a strong lone-up including John Millman (ATP 95), Ben Mitchell (ATP 236), Gavin Van Peperzeel (ATP 284) and the experienced Robert Smeets.

They will have their challengers through, with the Kooyong Classics possessing some serious ATL experience.  Fresh off his first grand slam win, the introduction of world number 310 Omar Jasika gives their team some real depth with Rubin Statham (ATP 396), Andrew Whittington (ATP 455) and Australia’s top ranked doubles player John Peers.

In the women’s field the Royal South Yarras possess a strong line up that has them as number one seeds. Daria Gavrilova (WTA 39), Varatchayta Wongteanchai (WTA 260), Storm Sanders (WTA 355) and Tammi Patterson (WTA 459) will lead the way for the Yarras.

SHIMADZU Corporation (Japanese women) are also strong and find themselves as the number two seeds. Led by Hiroko Kuwata (WTA186), and Miharu Imanishi (WTA 421), they will add a true international feel to the ATL.

Teams are awash with up and coming Australian players and the future of the sport will be on display. ATL Playoff action commences at 11am on Monday 25th January on the western courts of Melbourne Park. Fans can purchase a ground passes and head out to courts 10-15 to see all the action, excitement and energy that the ATL has to offer.  Finals will be at 5pm on Tuesday afternoon.

Court 10 will be live streamed through the duration of the playoffs.  To watch the live streaming and stay up to date with all the latest scores and action visit atl.tennis.com.au.