At the Brisbane International on Monday night, impressive teen Hyeon Chung overcame Sam Groth, who admitted to feeling the effects of a disjointed off-season. 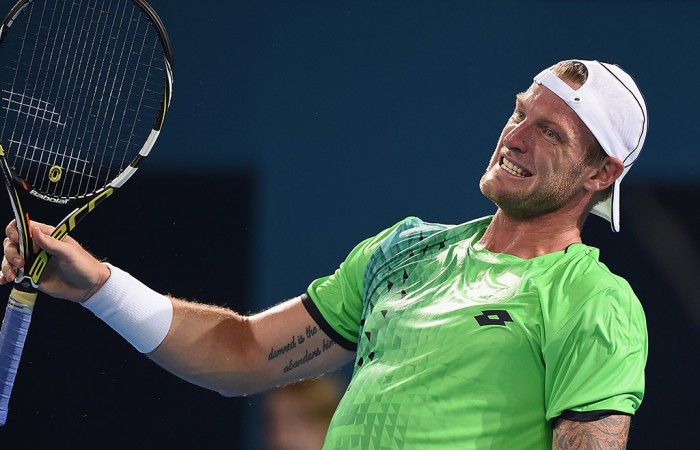 Big-serving Sam Groth has backed himself to put his best foot forward at the Australian Open despite stumbling in the Brisbane International first round.

But the Victorian did not want to make any excuses after being upset in straight sets by South Korean teenager Hyeon Chung at Pat Rafter Arena on Monday night.

World No.51 Chung booked a second round clash with third seed and former US Open champion Marin Cilic.

Groth said he would try to make the most of his Brisbane doubles campaign in a bid to make up for lost time after playing his first match since having a nerve removed from his foot in November.

The world No.60 has also received a wildcard for the Apia International Sydney ahead of the year’s opening major tournament.

“The guy is ranked 51 and I probably should have closed him out,” said Groth who led 5-2 in the first set.

“I am probably coming in off my most disjointed off-season in the last few years and I just need competitive tennis right now.

“It would’ve been nice to get a few more matches here, but obviously the main goal is getting ready for Melbourne.”

“In the end I’m only seven weeks post surgery.”

Groth’s departure capped a forgettable day for the local men at the Brisbane International.

But Chung showed why he was voted last year’s ATP Most Improved Player by finding a way to blunt Groth’s serve that pushed 230kph.

Groth had been expected to at least match his 2015 Brisbane performance when he downed defending champion Lleyton Hewitt on the way to the quarterfinals.

Groth – holder of the world record for the fastest serve at 263kph – went on to have a breakthrough 2015.

He received the Newcombe Medal after helping Australia reach the Davis Cup semifinals and reached the third round of a major for the first time at the Australian Open and then again at Wimbledon, taking Roger Federer to four sets.