Canberra Velocity's women have sealed a conference final berth with dominant play in the ATL, while the Velocity men still a chance to progress. 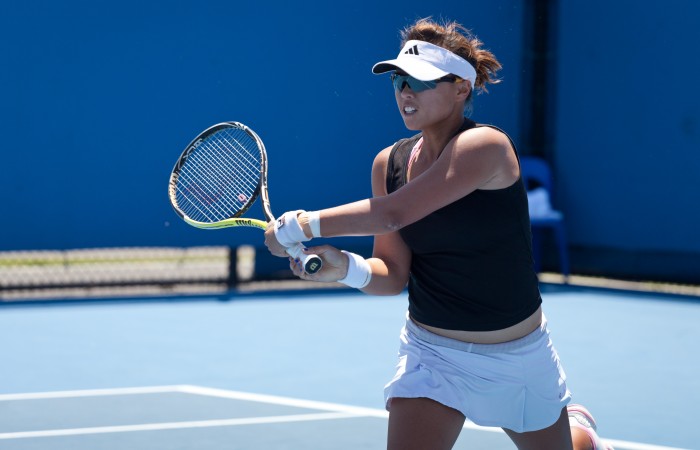 The Canberra Velocity women have been in dominant form, defeating both the Sydney Saints and Sunshine Coast Breakers five rubbers to one to ensure a conference finals berth.

And despite suffering back-to-back losses the past two days, the Velocity men still have a shot at making the finals.

The Velocity women dominated the Sunshine Coast Breakers in Saturday’s match, with Alison Bai, Ashley Keir, Tyra Calderwood and Kaitlin Staines all winning their singles matches to clinch the tie before the doubles rubbers were even contested.

In a further boost to the team, Alexandra Nancarrow played her first match after being injured for several weeks, teaming up with Bai to win their doubles match.

The win for the Velocity women sees them sitting clear in second place on the table, with the undefeated Western Sydney Warriors at the top.

The two teams will face off in Sunday’s match, with Velocity still a chance to knock the Warriors off the top of the table.

Regardless of that result, both teams will progress to the North Conference finals next weekend in Queensland.

On Saturday, the Velocity men faced off against the top-of-the-table Sunshine Coast Breakers.

Jake Eames lost in three sets to Dayne Kelly, a player who has been in good form and who won the recent Wollongong Pro Tour event.

Daniel Guccione hit back for Velocity with a win over Thomas Fancutt, before Alexander Babanine and James Frawley both lost in straight sets, giving the Breakers a 3-1 lead.

Both doubles matches went to three sets, but the Breakers proved too strong, taking both matches to win five rubbers to one.

Despite the loss, Velocity’s finals hopes are still alive – they will need to win their match on Sunday against the Western Sydney Warriors. Velocity beat the Warriors 4-2 last time the two teams met.

The Velocity Women defeated the Sydney Saints on Saturday night, with Alison Bai, Ashley Keir and Tyra Calderwood all winning in straight sets.

Annerly Poulos’ 35-match singles winning streak finally came to an end, with the youngster going down to Gabriella Da Silva-Fick.

The Velocity doubles teams of Calderwood/Keir and Bai/Staines won their matches to seal victory for the Canberra side.

The Velocity men beat the Saints last week when they played in Canberra last weekend, but could not repeat their efforts on Saturday night.

Jake Eames, James Frawley and Troy Lockwood all lost their singles in three sets, while Benard Nkomba beat Dimitri Morogiannis in straight sets to put the Saints up 4-0 after the singles rubbers.

Daniel Guccione and Alexander Babanine were able to score a three-set doubles win, while Eames and Frawley lost in straight sets.

Canberra Velocity will return to the courts on Sunday at 10am.