Nick Kyrgios has scored a win over injury-hampered No.3 seed Stan Wawrinka to move through to the last 16 at the ATP Montreal Masters. 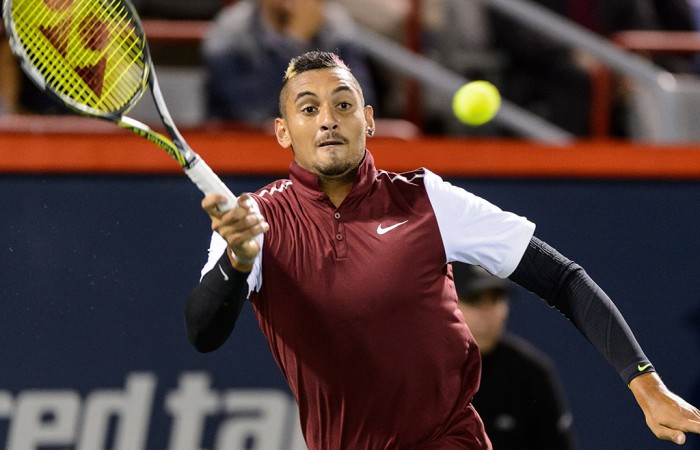 Nick Kyrgios has moved through to the third round of the ATP Montreal Masters after No.3 seed Stan Wawrinka was forced to retire with a lower back injury.

The Swiss began to show signs of physical discomfort in the early stages of the third set as Kyrgios was taking control.

After the Aussie moved ahead 3-0 thanks to a forcing backhand return that drew an error, Wawrinka called for the trainer.

Next up for Kyrgios is 16th seed John Isner, who overcame local hope Vasek Pospisil.

Kyrgios joins compatriot Bernard Tomic in the third round after the Queenslander upset reigning US Open champion Marin Cilic in straight sets.

Earlier, the match had been a competitive affair. Kyrgios scored an early break in the first set to move ahead 2-1, only to lose it quickly.

Games progressed on serve to a tiebreak, where Kyrgios saved two set points. He brought up one of his own with an incredible  204km/h second serve, yet Wawrinka served his way out of trouble and ended up taking the first set when Kyrgios erred on a forehand.

Kyrgios gained a breakpoint in the second game of the next set with a magnificent backhand passing shot cross-court.

Although he didn’t convert it, he broke in the sixth game after Wawrinka dumped a forehand into the net.

Maintaining his advantage, Kyrgios served it out confidently, winning a flawless 16 of 16 first-serve points in the second set.

He then produced a wily drop shot winner to break serve in the opening game in the third, before Wawrinka’s back troubles became apparent.