Tennis 360: calling on the coach

WTA players have been calling their coaches on the court for years but whether that’s good for tennis is still widely debated. DAN IMHOFF explores the rules, and possible expansion, of on-court coaching. 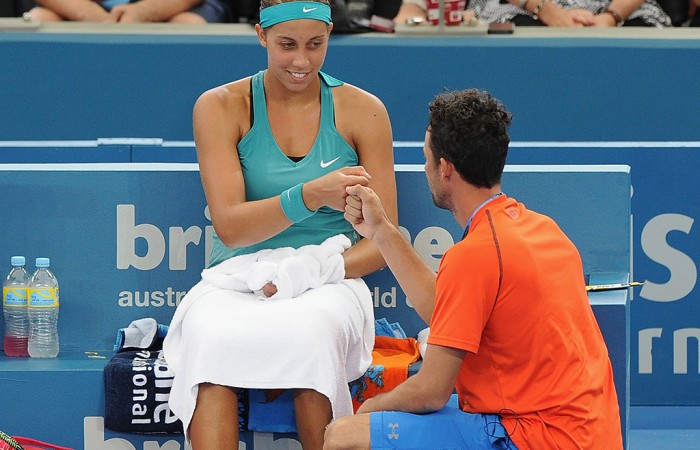 Part of the challenge in any truly individual sport is the ability to meld and adapt the physical with the mental to find a way to win.

Where golfers have their caddies and boxers their trainers on hand, the purist argues tennis is one of those rare pursuits where the contender should ultimately be responsible for any changes in strategy in the heat of battle.

In 2009, the WTA tour gave players the option to change all that with the introduction of on-court coaching.

The idea was to give television fans a behind-the-scenes glimpse at how the player and coach think during a match and an insight into some of their strategies.

A further train of thought was that it would help stop some of the illegal on-court coaching that came from the player’s box.

Struggling to find form for much of the first part of this year, 22-year-old American Sloane Stephens called on her coach Nick Saviano to help summon a come-from-behind victory against Bethanie Mattek-Sands in Charleston in April.

“It forced me to stay focused and just compete on every shot and just make sure that I’m having fun out there,” Stephens said. “And we work well together, and he really does motivate me and push me to do better. So it helps.”

“This is when you have to rise above fatigue, rise above frustration,” Saviano could be heard saying to his charge as she stared down defeat to a player ranked more than 100 places lower. “You have to push yourself every single point. This is when champions are made.”

As of this season, the WTA has also allowed the on-court coaches to bring real-time statistics of the match onto court via mobile applications.

Everything can now be quantified in real-time from where a player is primarily sending her second serves on the deuce court to how often she goes down the line with her forehand.

“Many of our matches usually come down to just a few key points and any advantage that players and coaches can gain by analysing trends and data could deliver an edge in the match,” WTA chairman and chief executive Stacey Allaster said.

Former world No.2 Simona Halep is of the opposing mindset. She does not see a need for having live data or her coach at her disposal mid-match.

“I don’t like to call my coach on court and to speak about this,” Halep said. “I like to be alone there, to see what I can do during the matches.

“I think it helps some players; it’s a good idea. But, you know, I cannot comment on this, because for me I don’t like this.”

Davis Cup and Fed Cup have always allowed permanent on-court coaching but that is because they are team competitions.

Purists argue if the concept is not available to the players on the biggest stages – at the Grand Slams – then a player should get used to doing without it on tour.

Currently only the WTA Tour allows on-court coaching and despite calls to trial it on the men’s tour, Roger Federer, for one, is firmly against it.

“If it does happen, it’s hopefully after I’m done playing,” the Swiss great said. “I really don’t think it’s necessary. I don’t think it’s fair, maybe, because not everybody can afford a coach … it’s just not right.

“It’s cool to figure it out yourself. You can look over to your coach for comfort and support, but other than that, I think tennis should be one of those unique sports where you don’t get coaching.”

The rules allow players on the women’s tour 90 seconds for on-court coaching once per set either at a change of ends or at the end of a set. She can also request it if her opponent takes a change of clothing or toilet break, or when her opponent requests a medical timeout.

If the match is televised, on-court coaches have to wear a microphone to capture the conversation and they’d better not even think about switching it off otherwise they are suspended from using it for the rest of the tournament and the following tournament.

A player must designate her on-court coach before the start of her match and for a player, such as American teenager Madison Keys, this can pose a dilemma when she has a joint coaching arrangement with former world No.1 Lindsay Davenport and her husband Jon Leach.

“She jokingly told me to flip the coin to decide if Jon or her would go out there, and I actually flipped a coin,” Keys said at Indian Wells earlier this year. “So that’s how we decided. I think it will change depending on if she has to go straight to the (broadcast) booth afterwards.

“I think she did a good job. She will probably be on court a couple more times.”