Casey Dellacqua has recovered from a first-set deficit to stun 17th seed Elina Svitolina at Wimbledon, yet fellow Aussie Ajla Tomljanovic fell to Dellacqua's next foe. 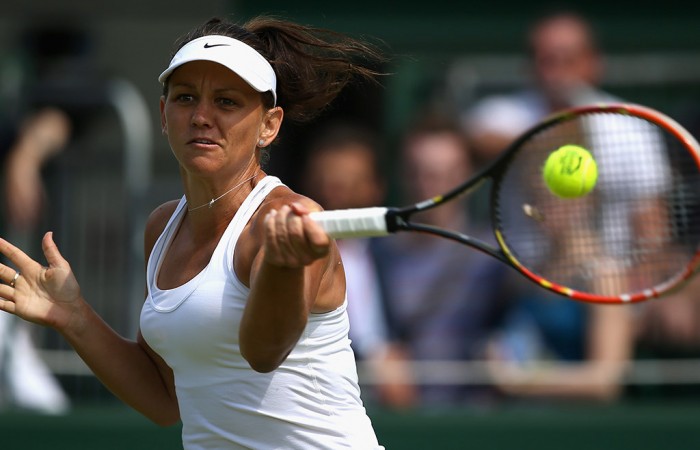 No way will Casey Dellacqua trade motherhood for a shot at Wimbledon glory, so instead she’s juggling both challenges at once.

And so far, compared to the sleepless nights, Dellacqua’s day job is proving a relative breeze with Australia’s tennis super-mum sweeping into the third round at the All England Club without dropping a set.

In a magnificent comeback, Dellacqua recovered from 4-1 down in the opening set to upset Ukraine’s 17th seed Elina Svitolina 7-6(3) 6-3 on Thursday to set up a showdown on Saturday with 2012 finalist Agnieszka Radwanska.

“She made quarters of the French Open, so it’s a good win for me,” Dellacqua said.

Dellacqua somehow managed to dial in despite being up half the night tending to two-year-old son Blake, who couldn’t sleep in the unseasonal London heat.

“So I had to have a bit of an extra sleep in this morning just to make sure I was fully well rested,” the West Australian said.

“Those are the challenges. You never know what the nights are going to bring.

“It’s about managing my time because I want to spend every ounce of energy I can improving my tennis and becoming a better player but, on the other hand, I want to spend as much time as I can with Blake.

“It’s about managing both kinds of roles and making sure everyone is happy. I feel like I do a pretty good job.”

Dellacqua is doing quite the job.

Since Blake was born, the free-swinging left-hander has surged from outside the top 200 to a career-best 26th in the world last September.

But the 30-year-old admits it’s parenthood has been more of a struggle than she could have magined.

“It’s harder than I thought it would be, for sure,” Dellacqua said.

“You’ve got this little baby and you’ve got to care for it. Being on the road and travel, hotel rooms, flights, it’s definitely challenging but it’s also rewarding in so many ways.

“It’s heaps of good fun and we love it. He loves the creche and he’s a very adaptable little boy.”

Just as Dellacqua is proving adaptable on court.

Victory over Radwanska on London’s hallowed grass would match her grand slam-best runs to the last 16 in Melbourne and New York.

Yet to beat the crafty Pole, who many liken to Martina Hingis for cunning and guile, Dellacqua knows it will be tough.

But she vowed to go out swinging.

“I’ve got nothing to lose and that’s good for me,” Dellacqua said.

“As the draw goes on and on, you start playing bigger names and bigger seeds.

“I can play free and aggressive tennis – the way I like to play – and on the day, you never know.”

“Casey has been playing really well on the grass – and she’s a lefty. That’s always tricky on the grass,” Tomljanovic said.

“If she plays her game and if she’s on, I’m definitely giving Casey a chance.”