John Millman lost a heartbreaker at the All England Club on Wednesday while Matt Ebden's inspiring run also came to an end. 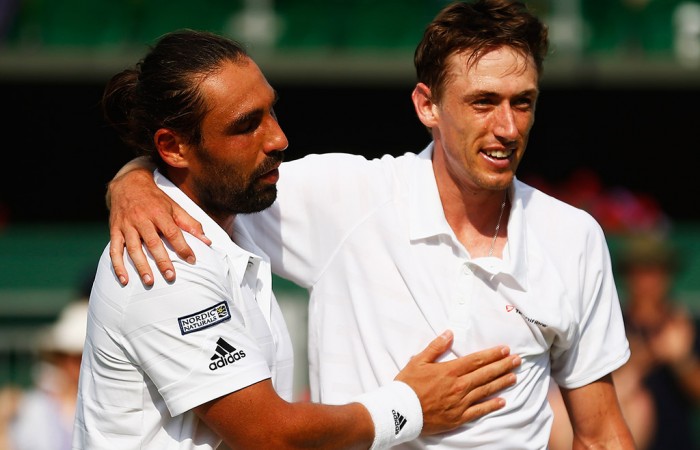 John Millman’s Wimbledon odyssey is over and he’s shattered.

“It’s devastating that the experience had to end because I was loving every second of it,” Millman said after relinquishing a two-set advantage in a 6-7(5) 2-6 6-3 6-2 6-4 second-round loss to former semifinalist Marcos Baghdatis.

“I was loving playing on the grass here and it’s extremely upsetting that it’s over.

“But I really did leave it out there and, at the end of the day, I got beaten by the experience and the talent of Marcos Baghdatis.”

Millman provided one of the feelgood stories of the tournament.

Remarkably, the 26-year-old Queenslander had never even been to the All England Club until successfully qualifying with three wins at nearby Roehampton last week.

After flying his parents over from Brisbane, Millman delivered with a stunning straight-sets first-round victory over top-20 star Tommy Robredo to net himself an $A97,000 pay day – doubling his season earnings.

He stood on the brink of adding another $A61,000 to his bank balance and having to honour a promise to invite his four sisters to join the party from Australia before running out of steam on Wednesday.

“Probably because of a little bit of emotional or physical fatigue I fell short,” he said.

“Also Marcos, he’s a free-flowing player and when he gets on these rolls, sometimes it’s pretty hard to contain.”

Millman was unable to contain his own emotions when his fairytale run came to an end, warmly embracing his parents Ron and Shona.

“I love them to bits,” Millman said.

“Just as I love all the support I have from all over the world. I’m extremely humbled to get messages of support and to have so many people that support me and I’ve always tried to tell them how thankful I am.

“And obviously the two biggest ones I have are Mum and Dad. It was really special to have them there and I just wanted to tell them that.”

Despite his exit, Millman is projected to soar 25 places up the rankings to a career-high 95th in the world.

If he can stay there, he’ll receive direct entry to next month’s US Open and the late bloomer says his Wimbledon breakthrough has given him a taste and the belief he belongs.

“It just puts the fire in the belly. It gives you the desire to play in these types of tournaments,” Millman said.

“You want to be playing main draws of slams.”

Australian wildcard Matt Ebden was also gutted at being eliminated after missing a big opportunity to upset American John Isner.

Ebden had three set points at 6-3 in the second-set tiebreaker against the 17th seed and then a break point at 4-4 in the third set.

“I can’t believe it. I should still be on the court,” he said an hour after losing.

“I’ve been feeling really good and I definitely wasn’t ready to go out of this tournament.

“Two points and I’m up two sets to one. You never know if you’re still going to win the match, but I’d like to gamble on that.”