Sam Stosur said she was feeling more relaxed ahead of Wimbledon, and it showed on Monday in her straight-sets first-round victory over Danka Kovinic. 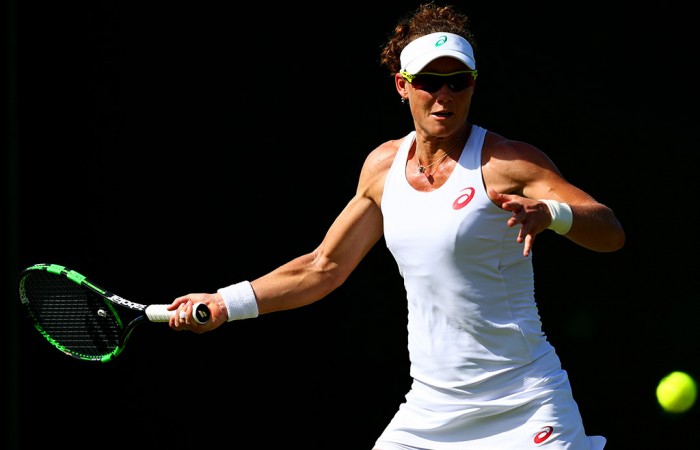 Stosur swept aside her lean Wimbledon record, which includes six first-round losses and no trips past the third round, with a commanding 6-4 6-4 win over Montenegro’s Danka Kovinic on Monday.

“Obviously you don’t know what’s going to happen in any match, but I’ve had a few demons here in the first round,” she said.

“Considering all of that I felt really good going out on court – I felt prepared and was able to play like that.

“To come out with a straight sets win, I’m very happy.”

Stosur said her recent Wimbledon woes could be put down to any number of reasons – all of which changed on a yearly basis.

“It’s probably one of the better matches I’ve played here, to be honest,” the 22nd seed said.

“I didn’t feel the panic or stress or anything like that that I often have on this surface.

“I think every year’s had its reasons why (I haven’t performed well).

“Obviously I would like to try and change that but it is what it is – I can’t wonder all the time why I haven’t been able to do that.

“I think there’ve been some matches here where I’ve played very average and it just so happens to be here at Wimbledon, so then it’s obviously magnified.

“There’re other tournaments where I haven’t done well in consecutive years but it doesn’t matter because it’s not a Grand Slam.

“But obviously this year I’m trying to change that and I think today’s win is a good start to that.”

Stosur’s next challenge will come in the form of Urszula Radwanska, after the Polish world No.107 defeated Edina Gallovits-Hall 6-2 6-1.

While conceding Radwanska poses a legitimate threat, Stosur maintained there was a different feel to her approach this year.

“I just feel like I’m in a better head-space than what I’ve been in previous years coming in,” she said.

“I feel more relaxed about things hopefully that translates into a good result.

“You can only take one step at a time – today was good, gotta go back to the drawing board to start all over again for the next round.”