Dellacqua wins first up in Eastbourne

Casey Dellacqua has breezed through to the second round of the AEGON International in Eastbourne, while Jarmila Gajdosova joined her in the main draw after winning through qualifying. 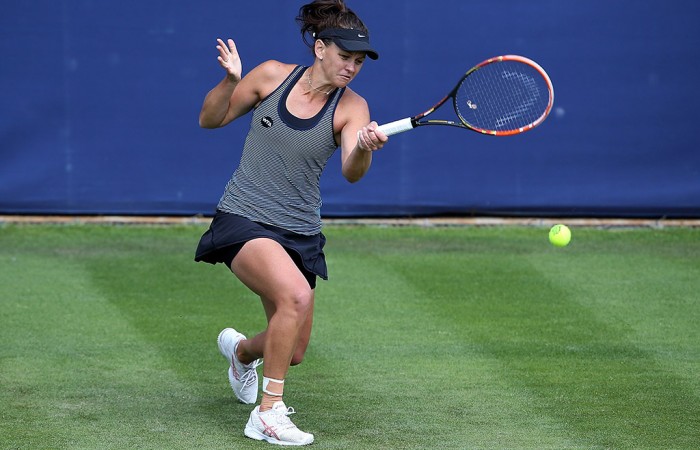 Casey Dellacqua is the first Australian through to the second round of the Wimbledon warm-up event at Eastbourne.

Dellacqua cruised past Slovakian Anna Karolina Schmiedlova 6-2 6-4 on Sunday, as Jarmila Gajdosova joined her in the main draw with a 6-4 6-1 final-round qualifying win over German Tatjana Maria.

But qualifying defeats for Daria Gavrilova and Ajla Tomljanovic left the rising youngsters heading for the practice courts to fine-tune their grasscourt games before the season’s third Grand Slam gets underway in London on Monday week.

Fresh off a 6-0 6-1 humbling of returning British ace Laura Robson, Gavrilova hekd a third-set advantage before falling 7-6(4) 2-6 6-4 to New Zealand No.1 Marina Erakovic.

Dellacqua’s reward for her straight-sets victory is a second-round clash on Tuesday with eighth seed Karolina Pliskova, the Czech who lost Sunday’s cliffhanger final in Birmingham 6-7(5) 6-3 7-6(4) to Angelique Kerber.

Gajdosova faces American qualifier Lauren Davis in her first-round match on Monday, while Australian No.1 Sam Stosur, as 16th seed, enjoys a bye and opens her title quest on Tuesday against Erakovic or Bulgarian Tsvetana Pironkova.